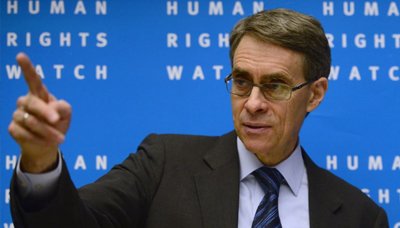 Althawra Net
Human Rights Watch director Kenneth Roth expressed anger about the international standards violation in Yemen by Saudi-led coalition.
In the Twitter campaign “The Forgotten War In Yemen,” Roth said that the Saudi-led coalition supported by Americans violated international standards by using cluster bombs.
According to the British activist Jim Maxson said that “It’s really hurt to think that Britain ,our country , supplies the bombs to Saudi-led coalitions to drop on our friends in Yemen.”
In her part, Julia Maxon confirmed that the aggression on Yemen is the largest humanitarian crisis in the world and must stop this war
Activists on Twitter wondered that how long the Yemeni people will stay under this bombardment and how long this silence about the Yemen’s suffering will continue .