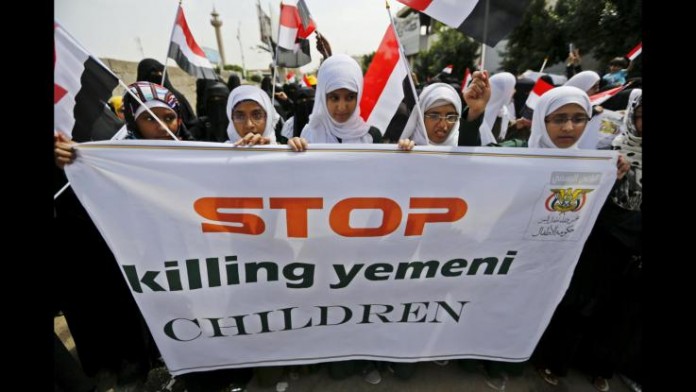 August 1st, Six aid agencies expressed their disappointment that the Saudi-led Coalition has not been put back on the UN’s list of parties responsible for grave violations against children in Yemen. The agencies – Action Contre La Faim, CARE, Intersos, Norwegian Refugee Council, Oxfam and Save the Children – called for tangible progress in protecting children caught up in the conflict in Yemen to have been demonstrated when the UN Security Council meets for its annual debate on Children and Armed Conflict on 2 August.

According to UN verified data nearly 2,000 children were killed or injured in Yemen during 2015, with the UN attributing 60 per cent of these casualties to Coalition air strikes. The UN also documented attacks on more than 100 schools and hospitals – nearly half of which it attributes to the Coalition.

Along with other parties to the conflict in Yemen, the Saudi-led Coalition was originally listed in the UN Secretary-General’s Annual Report on Children and Armed Conflict following UN-verified evidence of killing and maiming of children by Coalition forces and attacks on schools and hospitals.

However following pressure from the Saudi-led Coalition, it was quickly removed from the Annual Report, “pending review”.

Edward Santiago, Save the Children’s Country Director in Yemen said, “Yemen’s children have faced unimaginable horrors in the past 15 months. All parties to the conflict in Yemen are responsible for committing grave violations against children, but by the UN’s own evidence, the Coalition’s military operations are responsible for a significant amount of this suffering.”

Since it was first introduced in 2002, the listing of perpetrators in the UN Secretary General’s Annual Report on Children and Armed Conflict has proved an important tool in putting pressure on parties to armed conflict to comply with international law. Over 20 governments and armed groups have signed UN action plans, many of which have taken steps to end violations against children in order to be considered for “de-listing”.

Wael Ibrahim, CARE International‘s Country Director in Yemen said, “A dangerous precedent has been set by the removal of the Saudi-led Coalition from the UN list. It shows that the Coalition is able to use their influence to avoid scrutiny and accountability for grave violations against children.”

The agencies call on the Saudi-led Coalition and other parties to the conflict in Yemen to take concrete steps to end grave violations against children. They also urge UN member States to request the UN High Commissioner for Human Rights to urgently dispatch an independent, international commission of inquiry to investigate all alleged violations of international humanitarian law and international human rights law in Yemen. The Commission of Inquiry’s remit should include establishing the facts and circumstances of such violations while making recommendations, including appropriate accountability processes.

Sajjad Mohammad Sajid, Oxfam’s Country Director in Yemen said, “All parties to the conflict in Yemen must engage with the UN to agree on concrete measures to prevent and end grave violations against children, including the Saudi-led Coalition”.