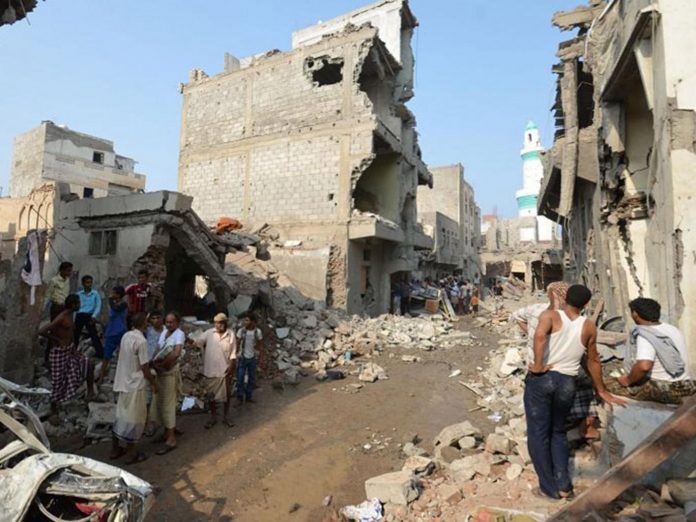 The UK has put its name to a call at the UN this week to set up an independent mission to report on human rights abuses in Yemen.

According o the Guardian the proposal, which marks a shift in British policy, is due to be voted on at the UN human rights council in Geneva this week and has been welcomed by human rights campaigners, even if it stops short of what some had been seeking.

The wording of the draft resolution suggests the UK for the first time accepts the need for international experts to monitor human rights abuses in Yemen, and to report on them to the UN human rights commissioner. The resolution is also substantially tougher than rival proposals put forward for debate at the human rights council by Arab states.

The draft resolution, sponsored by the Netherlands, requests the commissioner “to dispatch a mission, with assistance from relevant experts, to monitor and report on the situation of human rights in Yemen, on violations and abuses thereof since September 2014, and to collect and preserve information in order to establish the facts and circumstances of such violations and abuses”.

The Dutch draft resolution calls on the inquiry team to provide an oral update of its findings to the next meeting of the human rights council and then to report in writing to the council at the session after that. The 47 members of the human rights council will vote on the motion on Thursday or Friday, but there is likely to be horse trading behind closed doors before the vote.

The resolution has the support of 22 EU member states including France, Germany, Italy and Slovakia.

John Fisher, advocacy director at Human Rights Watch in Geneva, said the EU-sponsored resolution “stops short of a full international independent inquiry, but should be supported since it provides for international scrutiny reporting to the UN human rights commissioner. It is a key test of the UK’s commitment to human rights and its claim to have a seat on the human rights council that they continue to support this resolution.”

Sayed Ahmed Alwadaei, advocacy director at the Bahrain Institute for Rights and Democracy, said: “What has remained in Yemen since the Saudi-led coalition began its bombardment is the largest humanitarian crisis in the world. The UN’s credibility hangs in the balance and this resolution should be supported.”

The UK has previously said that it is not against an independent inquiry in principle, but nonetheless voted to reject one when the same issue was raised at last year’s human rights council. The UN instead voted for the appointment of a Yemeni national commission, but the UN human rights chief, Zeid Ra’ad Al Hussein concluded in August that the national commission was “unable to implement its mandate in accordance with international standards”.