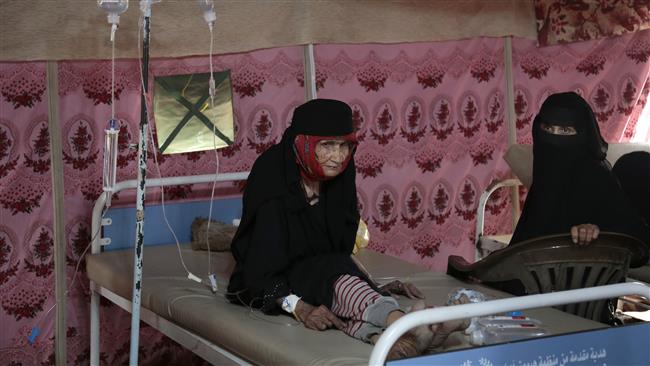 The Saudi-led coalition has been responsible for the deadly cholera outbreak in Yemen by causing shortages of humanitarian supplies and blockading the areas affected by the epidemic, a new study says.

According to the study published by London’s Queen Mary University on Friday, 78 percent of cholera cases and 81 percent of deaths from the disease occurred in areas cut off from supplies due to the Saudi-led airstrikes and blockades.

The Saudi Foreign Ministry did not immediately respond to all contacts with regard to the issue.

Caused by ingestion of food or water contaminated with the bacterium Vibrio cholerae, cholera first became epidemic in Yemen last October and spread until December when it dwindled, but only to worryingly resurface again in late April.

The WHO says around 30,000 critical health workers have not been paid salaries during the past year and critical medicines are lacking.

Since March 2015, Yemen has been under heavy airstrikes by Saudi Arabia and some of its allies as part of a brutal campaign against Yemen in an attempt to crush the popular Houthi Ansarullah movement and reinstall the resigned president, Abd Rabbuh Mansur Hadi, a staunch ally of Riyadh.

More than 12,000 people have been killed since the onset of the invasion and much of the country’s infrastructure has been ravaged in the Saudi airstrikes.

The relentless aerial aggression has put well more than half of all health facilities in Yemen in a state of complete or partial shutdown. Furthermore, there are critical shortages in medical staff in over 40 percent of all districts, according to Yemen’s Health Ministry.

The US and the UK have been providing the bulk of the military ordnance used by Saudi Arabia in the war. London has licensed 3.3 billion pounds worth of weapons since the beginning of the Saudi war on Yemen.

Washington also sealed a multibillion arms deal with Riyadh when US President Donald Trump made his maiden visit abroad in May. The deal, which is worth $350 billion over 10 years and $110 billion that will take effect immediately, was hailed by the White House as a significant expansion of the security relation between the two countries.