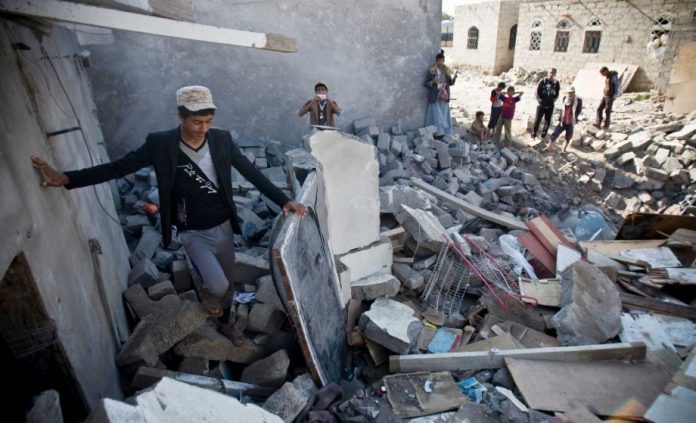 The US-backed Saudi-led aggression coalition airstrikes launched over 52 on several provinces targeting infrastructure and factories over the 24 past hours, according to a report combined by Saba News Agency on Saturday.
aordd Saba

In Hodeidah, eight citizens were killed and injured when an aggression bomb remnants blew up in Ezlah al-Badwah in Zabid district

Also in Hodeidah,  the aggression warplanes launched two Saudi airstrikes on al-Awadi factory for plastic bags in the current district in kilo 16, and several raids targeted the city’s water wells, causing considerable damage and disruption in the flow of water to the city.

Four airstrikes hit the port in al-Hawk district, causing material damages, an airstrike on a citizen’s farm in Bajil district, and five on the citizens’ farms in al-Manqm village in al-Duraihmi district and hit the radio in the city.

In Saada, an airstrike hit Qarah area in Majz district, four airstrikes hit al-Dhaher district, an airstrike hit al-Boqa’a area, two airstrikes on Elaf area, four on al-Azqol area and two on AAl Thariah in Sahar district, while in Baqim, Razih, Shada, border of Manbah districts were hit by Saudi artillery and missile shelling targeted the houses and farms of the citizen’s.

in Hajjah, the aggression warplanes waged ten airstrikes, seven of them hit separate areas in al-Mazraq.

In Jawf province, an airstrike hit cattle for citizens in al-Masloob district.