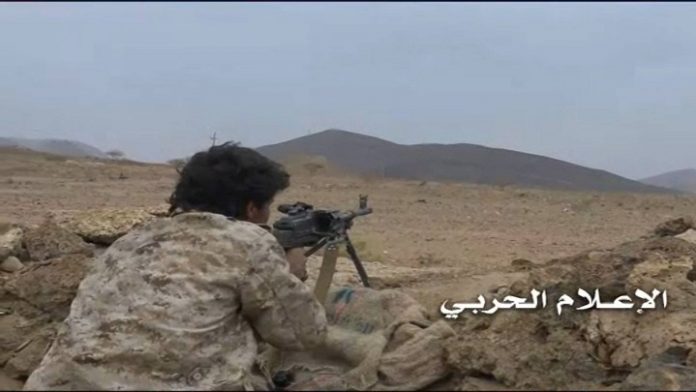 The Yemeni army and popular committees carried out offensive on Coalition-backed mercenaries in several provinces over the past 24 hours, according to a report combined By Saba News Agency on Saturday.

According to the report, it indicated that at least thirty-eight mercenaries were killed and injured in snipping operation on all internal and external fronts.

In Jawf province, nine mercenaries were killed in snipping operations western of Waqz in al-Masloob district.

In Jawf also, Katyusha missiles were launched on mercenaries’ gatherings in al-Hazm complex causing direct casualties, three military vehicles loaded with mercenaries were destroyed in an explosion east of Sabrin and al-Mahashima in Khab WaShaef districts killing and injuring all its crew.

In Taiz , artillery shelling targeted fortifications and gatherings of mercenaries in Salah district and in al-Jahmaliah, causing direct casualties, while in al-Rawnah vally in al-Wazeia’a the army cleans many of mercenaries’ sites in an attack operation, killing and injuring dozens.

In the western coast, the artillery of the army and committees targeted troops of the mercenaries in al-Tuhita.

In Marib, the sniper unit of the army shot dead twelve mercenaries in separate areas in Serwah front in Marib.

In Najran, two mercenaries were shot down near of Aleb Mountains, dozens of mercenaries were also killed and wounded in a special ambush by the engineering unit during their infiltration attempts near al-Sawh.

In Jizan, nine mercenaries were killed in snipping operations in al-Khazan hill near al-Dood mount, killing and injuring dozens in three ambushes by the engineering unit in al-Tewailiq.