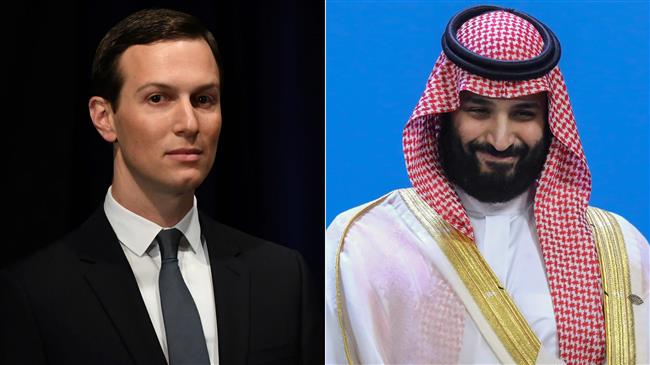 Weekly British magazine The Spectator said investigators on the US House Intelligence Committee were aware of the whistleblower’s claims and were planning to dig further into them.

Khashoggi, a former advocate of the Saudi royal court, was killed and his body dismembered by a Saudi hit squad after he entered the Saudi consulate in Istanbul on October 2, 2018 to secure documentation for his marriage to his Turkish fiancee, Hatice Cengiz.

The Washington Post, for which Khashoggi was a columnist, reported last November that the CIA had concluded that Prince Mohammed personally ordered the killing.

An investigative team led by the United Nations also said it believed MBS was the prime suspect in the state-sponsored murder. Washington has refused to formally implicate Mohammed, however.

Kushner, a real estate developer-turned-White House adviser, is known to have close ties with bin Salman.

According to The Spectator, the Turkish intelligence intercepted a call between Kushner and bin Salman, and President Recep Tayyip Erdogan then used it to force Trump to withdraw his troops from northern Syria.

On October 9, the Turkish military launched a cross-border operation in northeastern Syria in an attempt to clear the Syrian border areas of US-backed Kurdish militants after getting a green light from Trump.

Riyadh initially said it had no knowledge of Khashoggi’s fate, but later blamed the murder on rogue agents.

In his first public remarks on the matter, bin Salman attempted to portray himself as not having been involved in the brutal murder, which tarnished his international reputation.

In a PBS documentary, while denying an ability to keep an eye on everything, bin Salman said he bore responsibility for Khashoggi’s murder “because it happened under my watch.”

Kushner’s ties with the crown prince have come under scrutiny after it was learned that the White House official was communicating on the online messaging service WhatsApp with bin Salman.

Kushner reportedly called Khashoggi a “terrorist” in an off-the-record conversation with a reporter.

In May, Newsweek cited US journalist Michael Wolff as saying in an upcoming book that Kushner said of the slain Khashoggi, “This guy was the link between certain factions in the royal family and Osama [bin Laden]. We know that. A journalist? Come on. This was a terrorist masquerading as a journalist.”

Khashoggi, a critic of the Saudi regime’s human rights abuses and war on Yemen, had known former al-Qaeda leader Osama bin Laden from the early 1980s, when the latter fought against the Soviet Union in Afghanistan, and had interviewed him several times.

When bin Laden was killed by US forces in Pakistan in 2011, Khashoggi reportedly said that he was once “beautiful and brave” but had “surrendered to hatred and passion.”