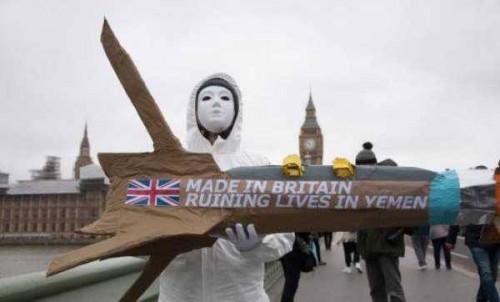 The UK government has breached its own guidelines requiring it to conduct regular inspections of controversial weapons factories making bombs used by Saudi Arabia in its aerial campaign in Yemen, a new report says.

The purpose of regular inspections is to check whether weapons producers fulfill the conditions of their export licenses. However, inspectors last visited US arms giant Raytheon’s missile factories in Glenrothes, east-central Scotland, in November 2016, and in Harlow, Essex, in November 2015.

This means Britain has breached its own guidelines requiring the inspections to be conducted “every three years” at a minimum, investigative websites Declassified UK and The Ferret reported.

The plant in Glenrothes makes parts for Paveway IV laser-guided bombs, supplied to Saudi Arabia, which has been conducting a devastating bombing campaign in Yemen for more than five years. Human Rights Watch has repeatedly warned that British-produced munitions, including Paveway bombs, are being used by Riyadh to strike civilian targets.

It is unclear exactly how many inspections have been missed, but trade minister Ranil Jayawardena told members of parliament earlier this month that a detailed report on the issue would come “at a disproportionate cost,” because the government would have to manually review all of its records. Jayawardena also previously argued that revealing the results of such inspections is “commercially sensitive.”

When asked about eight of Britain’s weapons factories, all linked to the Saudi bombing of Yemen, the minister admitted that half of them had not been inspected for more than three years. This is despite the government’s past claims that it has “the most robust” export control process in the world.

Human rights groups have long demanded that London stop selling weapons to Saudi Arabia, as UN experts and other watchdogs say Saudi airstrikes cause massive civilian casualties on the ground