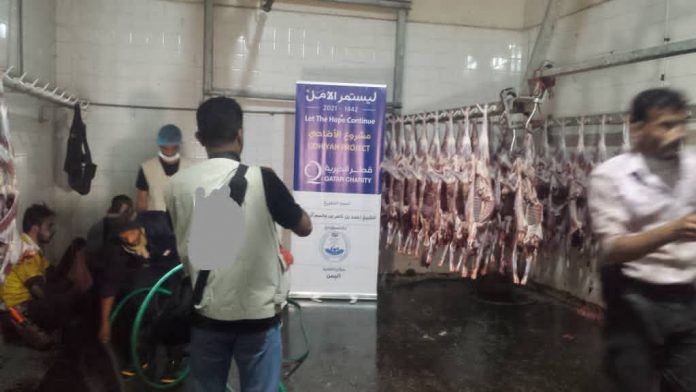 Some organizations in the Capital Sana’a have launched a project to distribute sacrifice meat to the poor and needy of the displaced, orphans, people with special needs and chronic diseases.

The project is implemented and funded by the Islamic Relief, Qatar Charity, Sahaba Khair, al-Rufaqa, Take My Hand” under the supervision of the branch of the Supreme Council for Management and Coordination of Humanitarian Affairs and International Cooperation (SCMCHA) in the capital Sana’a.

During the inauguration, Capital Sana’a assistant undersecretary, who also director of the Branch of the SCMCHA  Abdel Wahab Sharaf El-Din said that during the first day of the project meat was distributed to more than 14,083 beneficiaries.

He pointed out that the three-day distribution process is carried out through six centers according to the beneficiary groups.

Sharaf El-Di pointed to the existing cooperation between the SCMCHA and organizations supporting the service of humanitarian work, including the families of martyrs, as a result of the difficult economic conditions resulting from the continued aggression and siege on Yemen for more than six years.