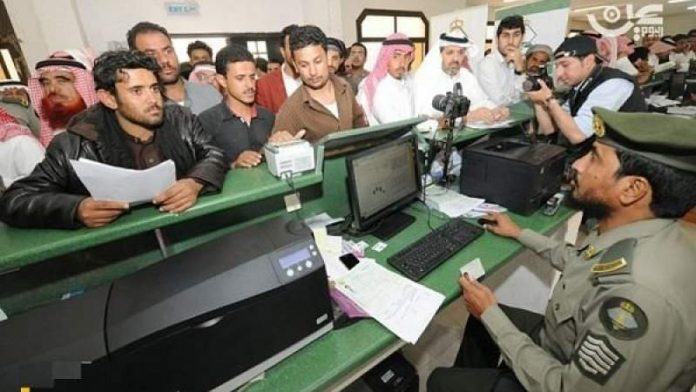 Over the past few days, Saudi Arabia’s war against Yemeni workers has expanded from the south of the kingdom to its east.

After the authorities gave Yemeni workers in the regions of Jizan, Najran and Asir a deadline to liquidate their jobs and leave the country, Riyadh decided to include workers in the eastern regions as well, with these measures.

Despite the escalating appeals of the Yemeni community in Saudi Arabia to the pro-aggression government, residing in Riyadh, to intervene to discourage the Saudi authorities from expelling tens of thousands of Yemeni expatriates in the kingdom, sources told Al-Akhbar that these measures intensified after Saudi Deputy Defense Minister Khalid bin Salman met with  the exiled Abd Rabbo Mansour Hadi, late last week in Riyadh.

This came after Hadi government’s Foreign Minister, Ahmed Awad bin Mubarak, failed to persuade the Saudi Foreign Minister, Faisal bin Farhan, during his meeting with him in the middle of last week, also in Riyadh, to stop the deportation procedures that would affect tens of thousands of Yemeni families.

The sources said that “new Saudi directives issued on Saturday require the termination of contracts with all Yemenis in preparation for their deportation from the eastern regions, specifically academics, doctors and medical assistants in hospitals in the southern and eastern regions.”

The sources added that “Riyadh has given all citizens and owners of private companies in the Dammam and Al-Ahsa regions, in the east of the Kingdom, a period of only four months, to lay off Yemeni workers in preparation for their deportation, and vowed to impose sanctions on private companies if decision is not implemented, while it was given only two months to dismiss Yemeni academics from The kingdom”.

Directives issued by the Royal Court ruled Dispensing of Yemeni academics in the universities of southern and eastern Saudi Arabia.

Observers believe that the Saudi measures may extend to other regions in light of Riyadh’s insistence on using Yemeni workers as an economic pressure card against Sana’a, in what the Supreme Political Council described as “inhumane practices” that affect tens of thousands of expatriates, pointing out these practices are reminiscent of what Saudi Arabia did during the Gulf War.

In the same context, the head of the Sana’a negotiating delegation, Mohammad Abdulsalam, indicated on his Twitter page that Saudi violations against Yemeni expatriates “are a humanitarian issue par excellence”, expressing his regret “for the very bad harassment they are subjected to, for no reason other than they are Yemeni.”

Riyadh had previously used this same measures against Sana’a in 2013, to stop oil exploration in the Yemeni governorate of Al-Jawf, which was actually achieved with the complicity of Hadi and his government.

However, jurists explained that the presence of Yemeni workers in Saudi lands is governed by the provisions of the “Taif Agreement” and its annexes signed between Yemen and Saudi Arabia in 1934, and then the “Agreement Jeddah” signed between the two sides in 2000.

The jurists indicate that “the two agreements granted the Yemeni citizen the right to work, open residence, freedom of investment and ownership, and not confiscation of property,” according to Article 14 of the “Taif Agreement”, noting that this agreement was not breached since the sixties of the last century until the beginning of 1990.

In this context, activists on social media called on the Sana’a authorities to cancel the “Taif Agreement”, which would allow them the right to demand the restoration of Yemeni lands in the south of the Kingdom, which includes Jizan, Najran, Asir and other regions.

This escalation, which would double the poverty rates in Yemen, which exceeded 85% over the past years, comes within the framework of the plan to tighten the economic crisis in Yemen.

According to economic experts in Sana’a, this will cause 27% of Yemeni families to starve, especially as they depend on money from expatriates as a main source of livelihood.

And the International Organization for Migration recently reported that it had monitored the return of more than 3,000 Yemenis from Saudi Arabia during the past two months.