On Wednesday, army and Popular Committees forces stormed the center of Al-Somaa district, which is one of the most prominent strongholds of Al-Qaeda and ISIS in Al-Bayda Governorate, central Yemen.

Local sources said that Sana’a military forces entered the city of Al-Somaa in a sudden and rapid attack, while Al-Qaeda elements withdrew.

The sources added that the army and popular committees forces took control over the center of the district and continued to advance towards the areas of Hazmieh, Al-Uqla and Sharjan 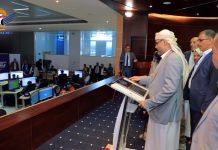