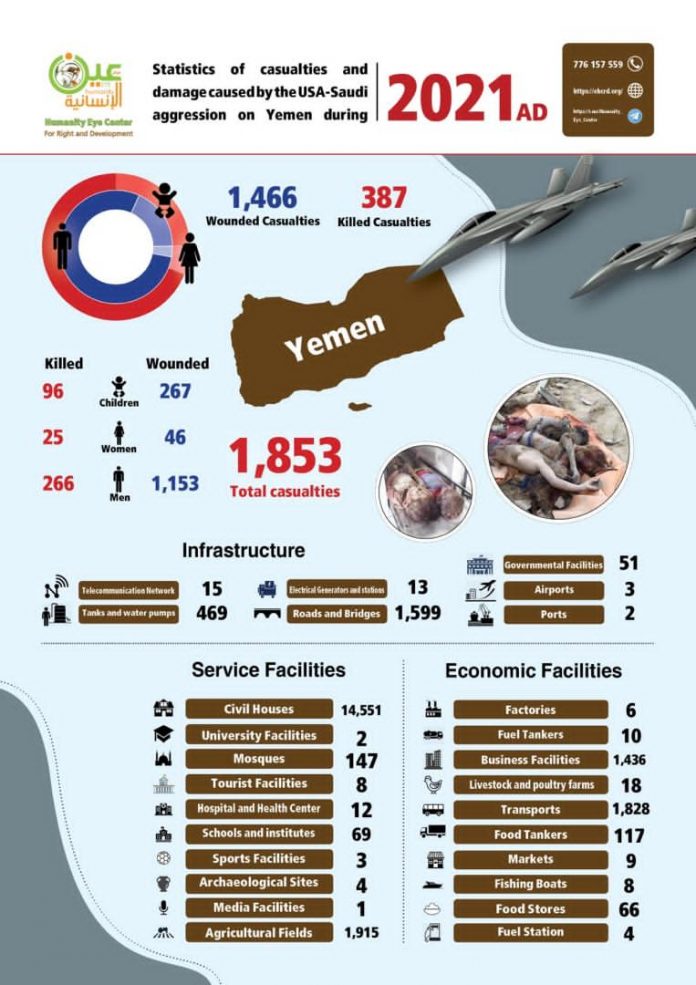 The Eye Humanity Center for Rights and Development revealed statistics on the crimes of the brutal US-Saudi aggression on Yemen during the year 2021.

The center stated in a press conference held today in Sana’a, that the total victims of the Saudi-led aggression against Yemen during the past year amounted to 1,853, including 387 killed and 1,466 wounded.

The aggression destroyed and targeted more than 14,551 homes, 147 mosques, 69 schools and educational centers and 1,915 agricultural fields.

The report indicated that the US-supported Saudi aggression deliberately targeted and destroyed 18 poultry farms, 8 fishing boats, 4 fuel stations, 9 markets, 10 fuel trucks, and 6 factories. In addition, it targeted 1,599 roads and bridges, 3 airports, 2 seaports, 13 stations and an electricity station in the year 2021.

The center indicated that the coalition of aggression targeted with its air raids more than 51 government facilities, 469 water tanks and networks, and 15 telecommunication stations.

The committee stressed that these documents and statistics were monitored and documented legally with complete impartiality.

“The international community and humanitarian organisations are primarily responsible for these crimes, due to their complicity with the Saudi aggressors and their silence about the continued flow of internationally prohibited weapons,” the Eye Humanity Center stated, adding that the United Nations bears full responsibility, primarily for the consequences of the continuation of the US-Saudi aggression and the comprehensive siege that has exacerbated the livelihood of the people of Yemen.