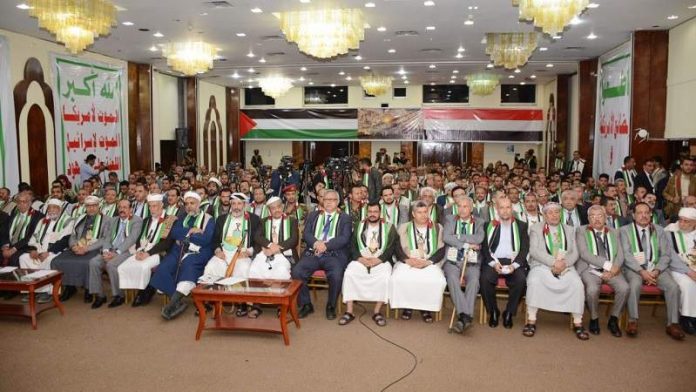 On Monday, April 25, 2022, the scientific conference “Palestine: The Nation’s Central Cause” was launched in the Yemeni capital, Sana’a. Over the course of 4 days, the National Salvation Government will organise the conference in cooperation with the Ministry of Higher Education and Scientific Research, with local, Arab and international participation.
During the opening ceremony, a member of the Supreme Political Council Sultan al-Samaei, in his speech, on behalf of the Chairman of the Supreme Political Council, stressed that the world has witnessed the most heinous crimes against the Palestinians by the usurper Zionist entity under the auspices of the US and its Western allies, which threatens security and stability in the Arab region. Al-Samaei called on the conference organisers to recommend reviving the Palestinian cause especially in the academic curricula, and to collect official and popular funds to collect donations for the Palestinian people to liberate all their lands.

In turn, the Prime Minister, Dr. Abdulaziz Saleh bin Habtoor, affirmed that this scientific conference represents a small part of Yemen’s commitments towards the central Palestinian cause, thanking the Ministry of Higher Education and Scientific Research for transforming this work from a political project into a scientific and cultural project. He also thanked he leader of Yemen’s revolution Sayyed Abdul-Malik Badr Al-Din Al-Houthi this event in a manner consistent with the role of Yemen, its fighters, scholars and personalities towards the central Palestinian cause.

The Minister of Higher Education and Scientific Research – Chairman of the conference’s Supervisory Committee, Mr. Hussein Hazeb, stressed the importance of the conference to clarify the methods and means that the Zionist and American enemy relies on to target the nation, touching on the stages of the emergence of the Zionist enemy entity and the factors enabling it, since the ominous Balfour Declaration, in which the UK pledged to establish a national home for the Jews at the expense of the Palestinian people in light of Arab and Islamic disintegration and betrayal.

In turn, the Grand Mufti of Yemen, Shams Al-Din Sharaf Al-Din, stressed that the Palestinian cause is the central issue of the nation, which requires achieving the meanings of brotherhood and intimacy among Muslims to confront the historical enemy of the nation, the usurping Zionist entity. He pointed out that the nation today is in a stage of conflict with the Zionist enemy and behind it countries of infidelity, atheism and tyranny, which requires the nation to adhere to its faith and its firm and principled positions towards its central cause the Palestinian cause. Shams Al-Din touched on the positions of the Yemeni leadership, government and people towards the Palestinian cause, despite the siege and brutal aggression it suffers from, calling on the Arab and Islamic peoples to strengthen the spirit of brotherhood, unity and cohesion and unite the resistance movements to confront the Zionist entity and put pressure on the regimes to lift the injustice against the Palestinian brothers.

For his part, the Deputy Minister of Higher Education and Chairman of the Preparatory Committee, Dr. Ali Sharaf El-Din, reviewed the goals and themes of the conference, which discusses more than 60 research papers and working papers from Yemen, Palestine, Lebanon, Iran, Iraq, Syria, Tunisia, Algeria, Sudan, Turkey and Pakistan. Sharaf al-Din pointed out that the conference seeks to analyse the role of the UK and the US in the establishment of the Zionist enemy, to familiarize the nation with the nature of the conflict with the Zionist enemy, and to study the Qur’anic vision towards the Palestinian cause and the repercussions of the September 21 revolution upon the Zionist enemy.

While the Secretary-General of the Islamic Jihad Movement in Palestine, Ziad Nakhaleh, indicated that the Palestine conference bears many implications in light of the difficult conditions Yemen is suffering from and the continuous aggression, indicating that the Palestinian people are creating new equations in the face of the Zionist enemy.

In his speech via video, Al-Nakhala pointed out that the Zionists use military force and benefit from the international cover and the collapse of Arab regimes that recognised the legitimacy of the entity and created conflicts that drain the nation, considering the conference as further evidence of the bias of Yemen and its Arab and Muslim people to the cause of Palestine.

In turn, the representative of the Islamic Resistance in Lebanon, Dr. Muhammad Raad, pointed out that the convening of this conference at this moment and this place has a place in the seriousness of concern for the Palestinian cause. He affirmed that the stand of the Yemeni people alongside the Palestinian people, led by Sayyed Abdul-Malik Al-Houthi, is a stand we are proud of and bet on.

For his part, the representative of the Palestinian resistance factions in Sanaa, Ahmed Baraka, confirmed that the war on Jerusalemites has become open and comprehensive with the aim of expelling the Palestinians from Jerusalem to make it the capital of their fake entity. “We meet today in this blessed conference to raise the voice of Jerusalem and Palestine and confirm that it is still the nation’s central issue”, he said, adding that the Zionist enemy tried desperately to push the Palestinian people to surrender with its aggression and brutality to bring Gaza to its knees, but it failed and Gaza remained a fortress of pride and clash.

The opening ceremony, which was attended by the President of the Supreme Judicial Council, Judge Ahmed Al-Mutawakel, the Speaker of the Shuwa Council, Muhammad Al-Aidarous, the Deputy Prime Minister for National Vision Affairs Mahmoud Al-Junaid, a number of ministers, undersecretaries of ministries, heads of public and private universities, members of the House of Representatives, a number of officials and the head of the Tribal Cohesion Council, included a poem entitled “The Sword of Jerusalem” by the poet of the revolution, Moaz Al-Junaid, and an operetta about Jerusalem by the vocalist of the revolution, Issa Al-Laith.

Over the course of 4 days, the conference will discuss 60 research papers and working papers divided into 8 different axes.