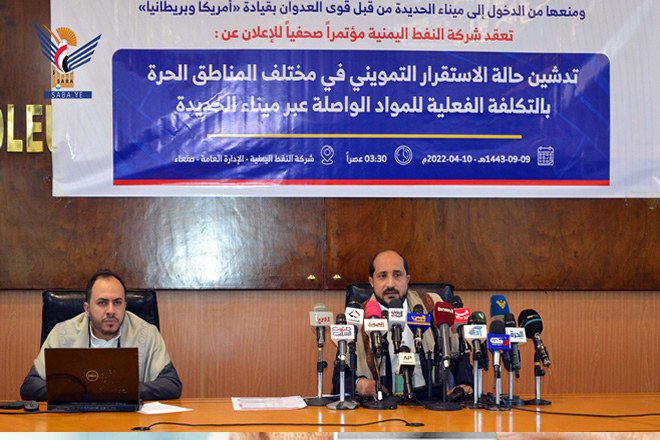 The Yemeni Petroleum Company (YPC) held on Sunday a press conference to announce the fuel supply stability in the various liberated areas at the actual cost of the materials arriving through the port of Hodeidah.

At the conference, YPC executive director   Ammar Al-Adhrai,confirmed that the company announces the suspension of work on the emergency plan and the inauguration of supply stability in all provinces and liberated areas.

Al-Adhrai pointed out that the company will reconsider the actual cost every ten days according to the positive changes in exchange rates.

He explained that the indicators in fuel prices and costs are affected by a number of variables, including the prices of the international stock exchange and the exchange rates of the local currency compared to foreign currencies, and there is another variable that does not exist in any country in the world, known as”Demiurge”, piracy and the seizure of ships on the Red Sea.

He indicated that the armistice was announced for a period of two months, even though fuel is a basic commodity and a citizen’s right and he has the right to obtain fuel at the lowest cost.

Al-Adhrai pointed out the difference in the cost of fuel arriving through the port of Hodeidah through the four ships of emergency fuel “Caesar, Sundus, Si Adour, and Sea Heart.” Noting that the price of a barrel is rising by 100 percent, and it is still high because what was announced was a truce initiative, not a truce initiative or lifting the siege or stopping the siege and aggression.

He pointed out that the total actual costs of gasoline arriving through the port of Hodeidah through the four ships to all regions of the Republic, amounted to YR 12,604 for 20 liters, including fines for delaying the detention of ships, as well as customs fees, company commission, storage fees and average internal transport wages in the liberated areas, station agents’ commission, and others.

The YPC executive director confirmed that the actual cost of gasoline that the citizen would have borne if the four ships entered the port of Aden, the “price of 20 liters” would reach YR 18,589.

He indicated that the difference in the cost of 20 liters of gasoline between the port of Aden and the port of Hodeidah at the stock exchange price of $127.60 per barrel is 5,985 YER.

He pointed out that the average total additional costs on the four ships, carrying 125,000 metric tons of gasoline, if they arrive through the port of Aden, amount to YR 52,468,500,000, indicating that the decrease in the actual cost of materials between the ports of Hodeidah and Aden is 48 percent.

The YPC executive director held the aggression countries and the United Nations fully responsible for the continued detention of fuel ships and preventing their entry to the port of Hodeidah.