Home Reports President Putin on Victory Day: We will not allow anyone to threaten... 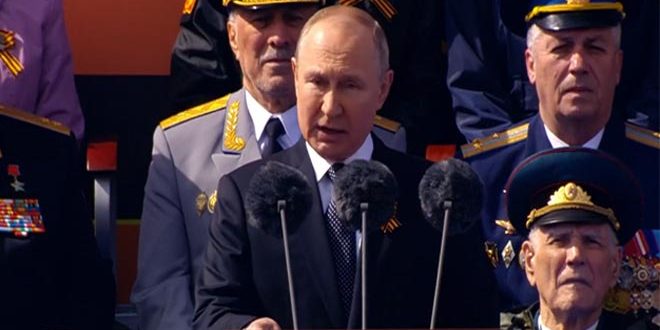 A military parade to commemorate the 77th anniversary of the Victory over Nazism began at Moscow’s Red Square, in the presence of Russian President, Vladimir Putin.

“I congratulate the Russian people on anniversary of the Victory Day in the Great Patriotic War…On these days, we are fighting for our compatriots in Donbass and for our country, and just as we achieved victory 77 years ago, we will achieve it today,” Putin said in a speech during the celebration.

Our duty is to preserve the legacy of those who eliminated Nazism in order not to repeat tragedy that many peoples suffered from, Putin noted.

The Russian President added that Russia’s intervention in Ukraine had been necessary because the West was “preparing for the invasion of our land.”

He went on saying “the danger was increasing more and more, and what we did was the only solution,” stressing that no one will be allowed to threaten Russia’s security.