Home Local News Grand Mufti of Yemen: A nation that has no past, will have... 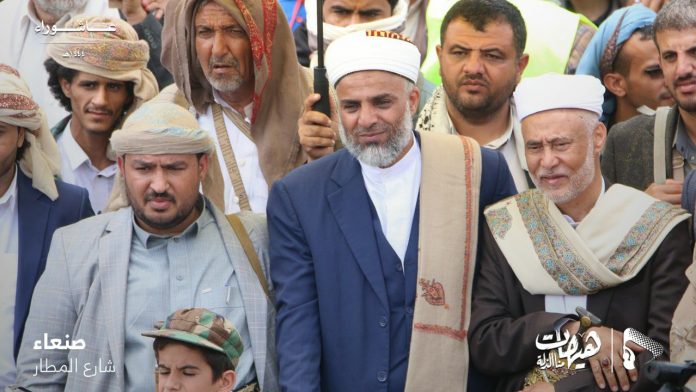 The  Grand Mufti of Yemen, the scholar Shams Al-Din Sharaf Al-Din, explained that the goal of commemorating Ashura is to link the nation to the scholars of guidance and its responsibility towards its causes.

This came during his speech in the mass rally, commemorating the Day of Ashura, the tenth day of Muharram which mark the martyrdom anniversary of Imam Hussein [AS], the grandson of Prophet Mohammad [Peace be upon Him] in the capital Sana’a.

“A nation that has no past, will have no present nor future. When we commemorate Ashura, we commemorate all the values ​​that the occasion carried,” Sharaf Al-Din said.

He added that those who separated the Nation’s present from its past have abandoned their responsibilities and today “we can see their positions toward Palestine and the Nation’s issues.”

“When we talk about Imam Hussein, we are talking about the divine approach that Allah assigned to his servants so that the Nation moves in bearing the responsibility,” he added.

He stressed that what prompted Imam Hussein to revolutionize is the duty of responsibility, and our religion is based on honesty, courage and active presence in the arenas.

“We are with you, people of Palestine, our ranks, our hands, and everything we have is with you,” he said addressing the Palestinian people. “O people of Palestine, do not doubt Allah’s sincere promise of victory. You, in your standing and steadfastness, please Allah and bring joy to every free people.”