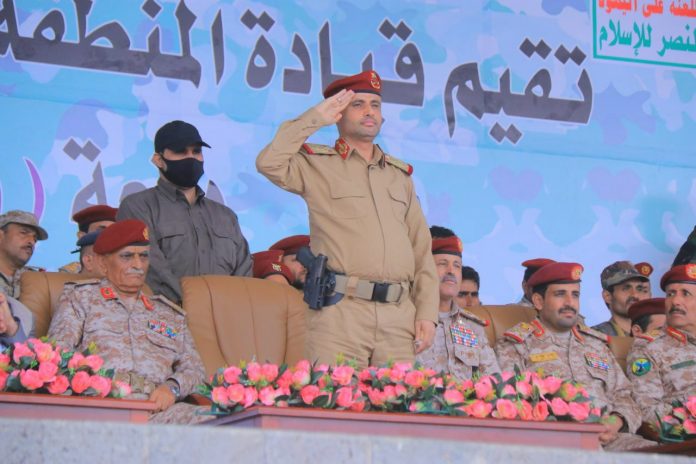 Mahdi al-Mashat, President of the Supreme Political Council and the Supreme Commander of the Armed Forces, attended on Monday the graduation ceremony of the batch “If you attack us, We are ready to counterattack at the 4th military region.

President al-Mashat delivered a speech in which he said, “This morning we are inaugurating the Hijri year from the Fourth Military region, for all state agencies and institutions, it will be the year of victory for all our Yemeni people until they attain their freedom and independence.”

Al-Mashat pointed out that the high readiness, training, qualification, awareness and insight of the armed forces is one of the very important things in war and in peace.

President al-Mashat thanked the armed and security forces for their excellent performance and continued discipline in bearing responsibility in the face of the unjust, hateful and brutal aggression.

He pointed out that the high, disciplined and distinguished performance of the security and military establishment thwarted all the enemies’ bets on all fronts, and in all fields and axes.

President al-Mashat stressed that the high morale that he touched through the military parade with these strong and experienced legions full of faith, culture, insight and awareness, and also capable of various types of combat training, will achieve the Yemeni people’s freedom and independence.

He said, “This is only the first inauguration of the 4th Military region, and all the military regions will follow, all full of training and mobilization, Legions of the army will continue until it is achieved for our people freedom and independence.”

He added, “The high level that our people have reached in the ranks of countries, all thanks to God and thanks to your efforts in confronting the brutal arrogance of the arrogant countries.”

He continued, “Thanks to God, and thanks to the leader of our blessed march and the steadfastness of this people, and thanks to your efforts, the world has come to look at our people with admiration and pride.”

President al-Mashat stressed the importance of continuing modernization, development, intensive training, and continuous and focused on the rehabilitation.

He said, “All our efforts, efforts, sacrifices and pure blood that are shed for the sake of God and for the weak in his land, are in order to alleviate the suffering of this people and achieve their freedom, stability and safety and in order to enjoy their full and undiminished sovereignty, and they will obtain it, and we will continue with you and through you to achieve the right of our people to live in dignity, freedom, independence and complete and undiminished sovereignty until we establish the pillars of our state without guardianship.”

He added, “The enemy began to feel frustrated, because through your steadfastness, we proved that the Republic of Yemen is here to stay, and no forces in this world can erase it or from the map. This is absolutely impossible.”

He addressed the graduates, saying, “You are not alone in the battle. The people of faith and wisdom are with you. It is your shoulder and support, represented by the upper hand of our missile force and drones, which have long afflicted the forces of aggression.

The President of the Supreme Political Council pointed out that whoever follows a leadership like him has nothing but elevation and loftiness, trust and continuation of training and qualification.

He added, “Trust that we will do everything in our power to continue building, training, qualifying, modernizing and developing our armed forces. This heroic institution is our bet after God Almighty, and it is the bet of our people, our leader, on which all the conspiracies of the enemies will be destroyed.”

President al-Mashat also addressed the Yemeni people, saying, “We will be at the level of responsibility and we will work to achieve the right of our people to live in a free and dignified life, Allah Almighty, and this is one of their rights, and we will extract it from the hardships of all our enemies.”

He said, “We bet that our people have reached their maturity and are armed with awareness, thanks to God and thanks to the cultural courses they receive from the leader of our march. Our people are immune from this war, but we need to arm ourselves more and more with the weapon of faith and awareness.

President al-Mashat added, “As well as on the military level and in the theater of military operations, the war will be more expensive, as the parties are preparing for it, and we are ready for it.”