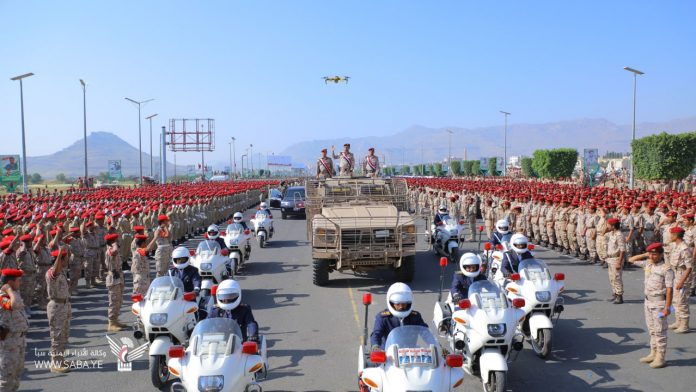 The capital Sana’a has witnessed a youth, military, and security parade which is the largest in the history of the region to celebrate the eighth anniversary of the glorious September 21 revolution.

The parade that attended by His Excellency Field Marshal Mahdi al-Mashat, President of the Supreme Political Council – the Supreme Commander of the Armed Forces, and other military and security officers reflecting an honorable picture of the quantitative development of the armed forces in their various units, classes, and formations.

The parade that presented an operetta entitled “Freedom and Independence”, formed a national and unitary expressive painting, reflecting the extent of the steadfastness of the Yemeni people, their cohesion as well as the rootedness of the unity of the homeland in their depths and conscience.

The titles of the youth scout show reflected the expressions of the joys of the Yemeni people on this national occasion, which constituted an important station in Yemen’s contemporary history in achieving freedom, pride, and dignity, and getting out of tutelage and external domination and the independence of political decision-making.

Then the parade was followed by the participation of the Mounted Squad, which raised the flag of the Republic of Yemen, in a scene that expresses joying and rejoicing of the eighth anniversary of the September 21 revolution, despite the systematic targeting by the US-Saudi-Emirati aggression of the originated Arabian horses.

Around 35,000 from various military formations participated in the military parade, from the war and naval colleges, the aviation college, the air force, land and navy, air and coastal defense, special forces, military police, and al-Fath brigades.

The military parades reflected the high level of training and qualification they received in security and military colleges, scientific and academic edifices, and the high readiness to defend Yemen, its sovereignty, and its independence.

The military parade included advanced weapons and air defense systems manufactured by the Yemeni Military Industries Authority during the period of aggression, which are systems that can neutralize hostile aircraft from the airspace, in addition to the three-generation winged Quds missiles, which are missiles manufactured by the local Yemeni military industries that reach the occupied Palestinian territories.

The parade also included a missile system, including Quds-3 winged missile manufactured by the Yemeni Military Industries Authority, intended to protect al-Quds al-Sharif and within al-Quds equation as well as several systems for multiple generations of unmanned aircraft, including Waeed plane which has a range of more than 3,000 kilometers.

In conjunction with the parade, drones, attacking aircraft, and helicopters roamed the skies of the capital Sana’a in a scene that reflects the readiness of the armed and security forces to protect the homeland, its capabilities, and its national gains.

The military and security parade also included the entry of vehicles carrying locally-made missiles of all kinds, which reflect the experiences and capabilities of the Yemeni army in creating an advanced deterrent weapon capable of confronting the enemy with its military arsenal.

In the military parade, the Yemeni armed forces revealed new strategic weapons that had not been disclosed before, some of which entered service soon, and some of which were tested and not used yet.

Where the curtain was unveiled on the missiles of the locally made naval boats “Asif-1”, which is characterized by its high speed and superior maneuverability, and has the ability to carry medium and light weapons such as (14.5 caliber machine gun and Katyusha 107) and 4 individuals with their equipment, and it has multiple combat missions, including raiding fixed and moving marine targets.

Among the marine boats that were discovered is the “Asef-3”, which is considered one of the fastest boats and has superior maneuverability, carrying medium weapons and air defense such as (cannon and 23 caliber) and 6 individuals with their equipment, and it has multiple combat missions, including intercepting moving marine targets and storming ships.

A Mallah-made combat boat, which is characterized by its high speed and superior maneuverability, and the ability to carry medium weapons (12.7 caliber machine guns, 14.5 caliber machine guns and an RPG) and 6 personnel with their equipment. It has multiple combat missions, including raiding fixed and moving marine targets.

A Flood, known as Tufan,-1 – a home-made unmanned attack boat, carrying a warhead of 150 kg, characterized by its small size, high speed, and superior ability to hide from enemy devices, its speed reaches 35 nautical miles per hour, and it is used to target stationary and moving marine targets nearby and is considered part of the defensive weapons from Yemeni coasts and islands.

A Flood, known as Tufan-2 is a homemade unmanned attack boat, carrying a 400 kg warhead, and is characterized by its high speed and superior ability to maneuver and hide from enemy devices. Its speed reaches 41 nautical miles per hour. It is used to target fixed and moving marine targets and its range is greater.

A boat-3, a home-made unmanned attack, carrying a warhead of 500 kg, characterized by its smoothness, high speed, superior maneuverability, and invisibility from enemy devices, its speed reaches 52 nautical miles per hour, used to target distantly fixed and moving marine targets in all sea conditions.

An ocean missile, known as al-Muheet missile,“developed from the Qaher-2-M” ballistic surface-to-sea missile, intended for maritime targets, medium-range, working with solid and liquid fuels, and characterized by its ability to operate in all weather conditions.

An Asef missile, a surface-to-sea ballistic missile, with a range of 400 km, a length of 10 meters, and a diameter of 0.7 meters, it works with solid fuel, its warhead weighs 550 kg, and it operates with intelligent guidance and control system, Yemeni-made 100 percent of the production of the MIC.

In the military parade, the armed forces revealed ballistic and winged missiles, which are as follows:

A Hattem missile, “the fourth generation of Badr missiles”, a long-range, surface-to-surface ballistic. It works with solid fuel, accurate hit.

A Quds-3 “winged cruise” missile, ground-to-ground, long-range, works on liquid fuel, and is characterized by hitting targets with high accuracy, and radars cannot detect it.

With regard to air defense weapons, the armed forces revealed several missiles as follows:

A Sadiq system for detection and tracking of targets from a distance of 40 km.

A Haidar system for detection and tracking of the target from a distance of 50 km.

A B-19 radar system, a Russian-made radar system that can detect targets from a distance of more than 200 km.

It is characterized by a type of caliber (12.7), equipped with a balancing device, which makes it flexible when moving, speed and when engaging, offensive and defensive at the same time and ensures qualitative progress in the field of confrontation, total weight: 4.5 tons.

Among its advantages: Weaknesses in most of the armored vehicles designed with the same design were studied, and those points were strengthened and removed in this type of armor.

A Khatef-2 drone has a length of 1.60 meters, a wing width of 1 meter, a diameter of 11 cm, and a range of more than 35 km. It is equipped with a sensor system for fixed and moving targets. It performs offensive tactical missions, and is used against enemy vehicles and armored vehicles.

A“Waeed” drone against the Zionist entity, 4 meters long, 3 meters wide, with a range of more than 2,500 km, carries several explosive warheads according to the type of target, and carries out offensive operations.