Home Reports Al-Nakhala: We have contact with Ansarullah and will have major role in... 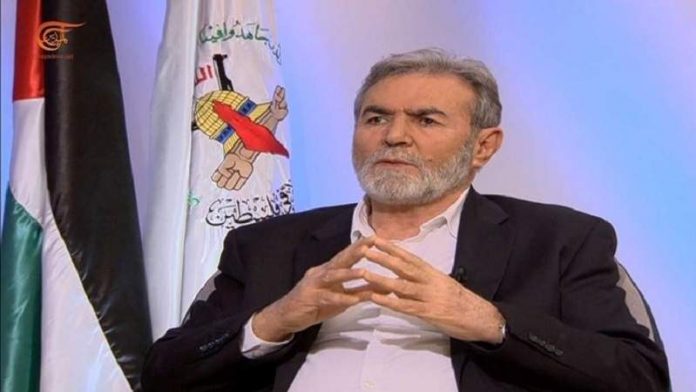 In an exclusive interview with Al-Mayadeen, Monday, Al-Nakhala said: “We have contact with Ansarullah, and I have full appreciation and respect for Sayyed Abdul-Malik Al-Houthi, and they will have a great role in supporting the Palestinian resistance.”

He added: “I place great hopes on the presence of Ansarullah and the Yemeni people in supporting the resistance of the Palestinian people on a practical level, even in the fighting.”

Al-Nakhala expressed his pride in the heroic prisoners who managed to get out of Gilboa prison, and said that “their action had an impact in opening a new stage in the march of Islamic jihad and resistance.”

He pointed out that “the idea, behavior and history of Islamic Jihad were at a test point during Operation Freedom Tunnel,” which “was a historic achievement that was reflected on the West Bank as a whole and on the Palestinian scene.”

He said, “The Palestinian resistance is making every possible effort to release the prisoners, and this is a duty that we will not stop striving for,” stressing that “the freedom of the prisoners is a priority for the Islamic Jihad and the resistance movement, and we insist on liberating them.”

Al-Nakhala revealed that “the prisoner deal failed,” stressing that “when it is reached, the heroic prisoners are among those included in it”.

Al-Nakhala stressed during the dialogue that what is happening in the West Bank today is “not spontaneous,” but rather “an armed resistance and uprising, a real and serious revolution in the face of the occupation, and we are doing everything we have to escalate this intifada, and we have to support it in every direction.”

He pointed out that “there is a great openness and cooperation to the farthest limits between the Islamic Jihad Movement and the Al-Aqsa Martyrs Brigades, which began after the Freedom Tunnel operation, which opened great horizons for resistance in the West Bank,” stressing that “what the heroes achieved in the tunnel and what was achieved on the ground is a new stage in Strive or Struggle”.

He stressed that “Palestine is for the Palestinian people, and the Israelis must understand that they have no chance of life in this place.”

Al-Nakhala continued, “The battle for the unity of the squares was the mother of all battles for us, because the Islamic Jihad movement fought it alone,” noting that “the naming of the squares meant Palestine and the squares of the resistance axis.”