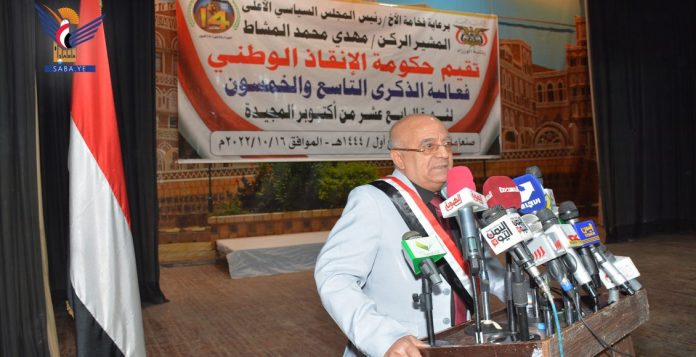 The National Salvation Government in Sana’a on Sunday organized a speech ceremony on the occasion of the 59th anniversary of the October 14 Revolution, in the presence of the two members of the Supreme Political Council, Ahmed Ghaleb al-Rahwi and Jaber al-Wahbani.

At the ceremony, al-Rahwi confirmed that the October 14 revolution embodied the struggles of the people of Yemen in its northern and southern parts to liberate a dear part of the Yemeni homeland.

Al-Rahwi stressed that the October 14 revolution was the revolution of all the free and honorable people from the north and south of the homeland that lasted for four years until the departure of the last British colonizer from southern Yemen on November 30, 1967.

He stated that Independence Day in the south was a practical response to the setback of the Egyptian and Syrian armies in 1967.

“We must draw lessons from the October 14 Revolution and benefit from its exploits and its heroic and struggle stock in the face of the new, old colonizer,” he said.

Al-Rahwi affirmed that the Supreme Political Council and the National Salvation Government have three human rights and legitimate demands to accept the extension of the truce, which are represented in paying salaries to state employees in the north and south, opening Sanaa airport with multiple destinations, lifting the siege on Yemeni ports and allowing the smooth entry of oil derivatives and medicines.”

He pointed out that the aggression countries and the ambassadors of America and Britain are fabricating gossip and misleading local and international public opinion regarding the demands due to accept the extension of the armistice.

In turn, the Prime Minister, Dr. Abdulaziz Saleh bin Habtoor, noted that the October 14 revolution established a broad national experience that is to re-establish Yemeni unity and the subsequent achievements.

He pointed out that the large presence of state leaders from the Political Council and the parliamentary, governmental, judicial and Shura constitutional institutions comes as a tribute to one of the exceptional stations in the life of the Yemeni people.

“Like most revolutions, this revolution has forgotten many of the fighters who withstood as the heroes with the first martyr in this revolution, Rajeh bin Ghaleb Labouza, who, along with a group of leaders of the National Front and the Liberation Front, led this revolution, and they made great efforts in mobilizing the energies of society in the south and north of the country at the time, which led to the dawn of the revolution,” he explained.

Dr. bin Habtoor added that he October 14 revolution is part of the history of the Yemeni people, and no one can say that it is part of their personal, regional or part history, because those who fell as martyrs in it are from all parts of the country, north, south, east and west, and its leadership is purely Yemeni leaders. While separation remains the black point in the history of Yemen

The Prime Minister stressed that the occasion requires remembering the symbols who attended, contributed and worked hard for the Yemeni revolution on September 26, October 14 and November 30, and to establish general national standards.

He pointed out that the young revolution of September 21, led by the Leader of the Revolution, Sayyid Abdul-Malik Badr al-Din al-Houthi, came to give additional impetus to the Yemeni revolution and restore respect to the martyrs in Yemen’s south, north, east and west, and to affirm the unity of the revolution and the unified will of the Yemeni people.

He confirmed that all those who withstood in Sana’a are considered heroes and free people, because Sana’a was and will remain a high platform for dignity, freedom, loftiness and heroism.

The Prime Minister reiterated that the coming solutions will come from Sana’a and not from the capitals of occupation and aggression. At the conclusion of his speech, he thanked those concerned with the prime minister’s office and the Ministry of Culture and everyone who attended and participated in the event.