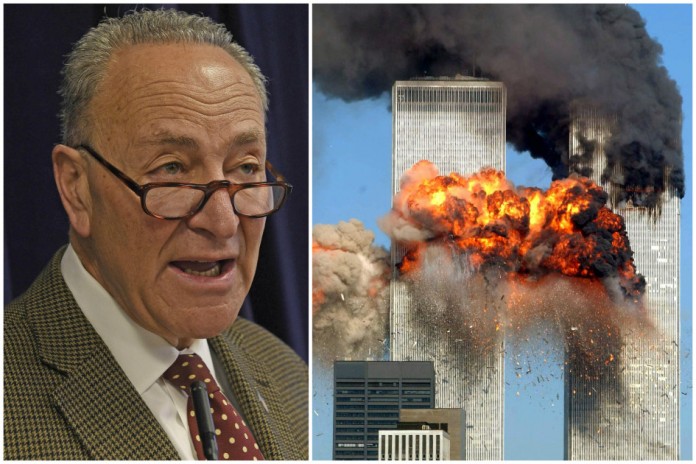 Last week’s unanimous passage of a Senate bill making it easier for 9/11 families to sue Saudi Arabia and other foreign terror sponsors was widely heralded as a major victory. It’s more of a cruel hoax, New York Post reported on May 24th.

Paul Sperry, NY Post  reporter, confirmed “It turns out that just before the vote, Sen. Charles Schumer and other proponents of the Justice Against Sponsors of Terrorism Act stuffed an amendment into the final draft allowing the attorney general and secretary of state to stop any litigation against the Saudis in its tracks.”

He also said “Yes, JASTA would remove the statutory restrictions that have prevented 9/11 families from taking the Saudi kingdom to court. But Schumer helped craft an entirely new section to the original bill, giving the Justice and State departments the power to stay court action indefinitely.” He added “ All they have to do is inform the judge hearing the case that the US government has engaged with ­Riyadh in diplomatic talks to resolve the issue.”

The report pointed out that the quiet, behind-the-scenes watering-down of the controversial bill explains why it passed without a single Republican or Democratic objection. The White House had lobbied senators heavily to kill the bill.

According to the report, the section that was slipped in at the last minute “Stay of Actions Pending State Negotiations” — leaves it up to the secretary of state to merely “certify” that the United States is “engaged in good-faith discussions with the foreign-state defendant concerning the resolution of claims against the foreign state.”

The attorney general, in turn, can petition the court for an extension of the stay for “additional 180-day periods,” effectively delaying lawsuits against the Saudis indefinitely.

The NY post report also indicated that Schumer’s office pointed to the Democrat’s comments in the Congressional Record where he notes that “if the administration seeks to use this new authority, it should be prepared to provide substantial evidence of good-faith negotiations to the court.”

Lawyers for 9/11 families say they were assured by Schumer and co-sponsor Sen. John Cornyn (R-Texas) that the administration would have to come forward with “real and tangible” proof to secure a stay.

Sperry  explained in his article that  9/11 families feel betrayed. “How do I feel about the Justice Department being given this power? Not good,” 9/11 widow Kristen Breitweiser said to Sperry. Breitweiser  added “Their failure to bring their own Saudi indictment reveals how little they care about holding the Saudis accountable for either their funding or operational support of the 9/11 hijackers.‎”