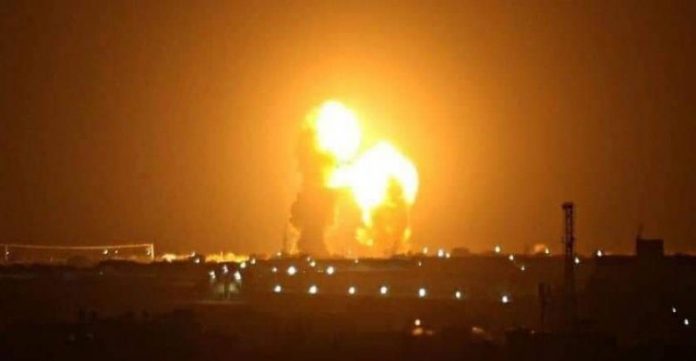 The Islamic Revolutionary Guard Corps (IRGC) of Iran has announced that it has launched dozens of missiles at Ain al-Assad base in Iraq, where US occupation forces are stationed.

According to Mehr news agency, the Islamic Revolutionary Guard Corps issued a statement regarding its first missile retaliation on the wing that includes the US military presence at the base at Ain al-Assad base, which comes in response to the assassination of the martyr Lieutenant General Qassem Soleimani and his companions.

The news agency reported dozens of missiles from the Air Force of the Islamic Revolutionary Guard Corps targeted the Ain al-Assad base, which houses the US forces in the Anbar region of northern Iraq.

The Islamic Revolutionary Guard Corps announced that the operation was carried out in the name of the martyr General Qassem Soleimani, and with the symbol of Zahra (peace be upon them).

The attack came in retaliation for the assassination of the martyr leader Soleimani by firing a number of surface-to-surface missiles.

The commander of the Quds Force of the Revolutionary Guards, Lietenant General Qassem Soleimani, was martyred along with the Deputy Chairman of the Popular Mobilization Forces Abu Mahdi al-Muhandis, who died along with several of their companions in a cowardly US airstrike near Baghdad International Airport.

Iran’s Tasnim news agency confirmed the “beginning of severe retaliation for the assassination of martyr Qassem Soleimani and his companions.” Dozens of Iranian ballistic missiles were fired at the US Base in Ain al-Assad, with latest reports stating that at least 80 US soldiers have died.