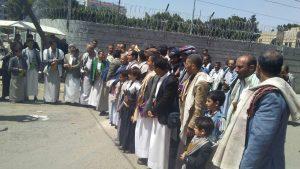 His remarks came during a vigil protest organized by employees of the YPC in front of the UN office in Sana’a after Friday prayers, entitled “You will not achieve the victory through the siege.”

He said 99.5% of Yemenk gas stations have stopped operating, and only seven stations out of a total of 2,017 are functioning.

Al-Adhra’i pointed out that the coalition is pushing its mercenaries to loot and reserve gas trailers coming from the company’s branches in the provinces.

He pointed out that the initial indicators of the losses suffered by the Yemeni people as a result of the detention of oil ships in 2020 amounted to two billion riyals.

The official held the United Nations and allied countries responsible for the consequences of the continued detention of oil vessels and the denial of entry into the port of Hodeidah.

Meanwhile, a statement was issued by the protesters, calling on the United Nations to put more pressure on the invaders to launch oil ships, lift the embargo on Sana’a International Airport and the port of Ras Issa and stop targeting Yemen’s economy.