51 French deputies signed a petition, which they submitted to the European Ministry of Foreign Affairs, to pressure the UAE to stop using the headquarters of the French “Total” company in the city of Balhaf, south of Yemen, as a military base and a secret prison where forms of torture are practiced.

The French MP, Francois-Michel Lambert, said that the message included that “the gas liquefaction site in Yemen, in which the French company Total is the main shareholder of 40%, includes a military base and a secret prison designated for the UAE in which forms of torture are practiced.”

In statements to “Sputnik”, he added that the factory was suspended at the beginning of the war in Yemen in 2015, and it previously represented about 45% of Yemeni tax revenues, and it also achieved large revenues for the French company, Total.

He pointed out that “it is clear that we cannot overlook the French responsibilities in this issue. France has relations with this world in role-playing, where things are not necessarily clear.” He pointed out that “regardless of the humanitarian considerations that must actually be raised in this case, first of all there is the issue of public funds management that needs to be clarified.”

Lambert explained that their role as parliamentarians is “to control the work of the government and manage public funds, as 216 million euros of public funds were given to support the project.”

He added, “I do not think that the French are happy to use more than 5 billion of public money to establish a prison that will be occupied by foreign forces in the country where Total is located.” He said, “We believe we know that there is torture.” Lambert believes that “France could have made better use of this 216 million euros instead of letting it serve the interests of a foreign power.”

He denounced their role as parliamentarians and said, “This budget represents one-thirty of the budget for a hospital construction project. This is money that was not put into hospitals and was spent on a project that is no longer the original project, but rather a prison.”

During the document, the deputies demanded that their country pressure the UAE to restore the rule of law over the facility’s site in Yemen, as France is the owner of the “Total” company, which is the largest shareholder of 40%.

The Associated Press previously revealed, in a press investigation, that there are 18 secret prisons run by the UAE and its allies in southern Yemen, and stated that nearly 2,000 Yemenis disappeared in those prisons, where cruel torture methods were the main rule.

And repeatedly, international human rights organizations have called on Abu Dhabi to close these prisons and respect human rights standards in the Yemen war, but they do not listen to these demands. 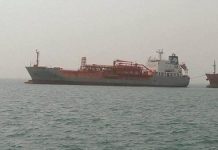