Home Reports The US Could End Saudi War Crimes in Yemen – It Just... 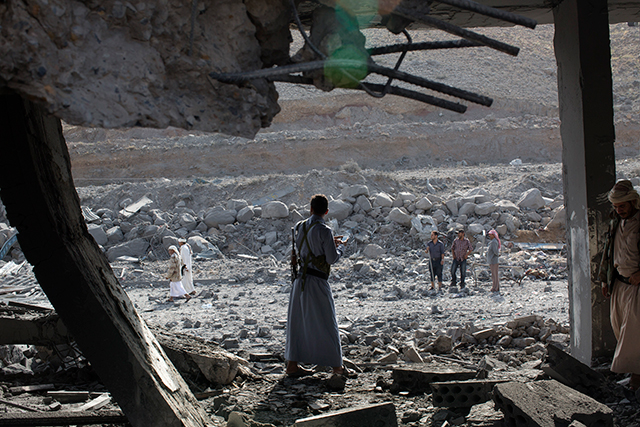 The American writer and analyst Gareth Porter said that although the Obama administration is not happy with the Saudi war and has tremendous leverage over the Saudis, it has demonstrated over the past several weeks that it is unwilling to use its leverage to force an end to the war.
In its analytic report that published in the Truthout website , Porter said that it now appears that the administration is poised to resupply the munitions used by the Saudis in committing war crimes in Yemen.
“The Saudi-led coalition is guilty of systematic war crimes in Yemen, and the US bears legal responsibility because of the use of arms purchased from the United States, an Amnesty International report charged in early October,” Porter added.
The report said that on October 6 Amnesty report documented an openly declared Saudi policy of deliberately targeting two Yemeni cities for air attacks in violation of the laws of war, It also documented US liability for the war crimes committed in the air war against Yemen.
Amnesty researchers who visited the Sada’a governorate in early July 2015 found that hundreds of airstrikes had destroyed or damaged beyond repair scores of homes, several markets, the entire main shopping street and virtually every public building, including the post office, the court, banks and civilian administration offices.
They have also found that airstrikes on civilian homes in villages around Sada’a city have killed and injured hundreds of civilians not involved in the conflict, many of them children and women.
The same researchers found that Saudi-led forces used internationally banned cluster bombs, which scatter hundreds of smaller bombs over a wide area, as well as bombs as large as 2,000-pounds, which it said were also “likely to cause death and destruction indiscriminately or far beyond the strike location.” Neither the United States nor Saudi Arabia has signed the Convention on Cluster Munitions.
According to a joint report by the UN Office for the Coordination of Humanitarian Affairs, 2,682 civilian deaths and injuries resulted from air bombardment in Yemen from late March to the end of July 2015 – more than anywhere else in the world during the first seven months of the year.
The Amnesty report points out that the United States has a legal obligation under the Arms Trade Treaty not to provide weaponry it knows will be used in the indiscriminate bombing of Yemen. Article 6 of that treaty, which entered into force in October 2014, forbids the transfer of arms and munitions to a party to an armed conflict if it has knowledge that the weaponry will be used for “attacks directed against civilian objects or civilians protected as such, or other war crimes as defined by international agreements to which it is a party.”

The Amnesty report notes that the United States is also providing logistical and intelligence support to the Saudi-led coalition. This logistical assistance is particularly important because the Saudis and their Gulf allies need the assistance of US mechanics to keep their aircraft running. That fact gives the Obama administration a major source of leverage on Saudi policy. Furthermore, last summer the Saudis began to run low on the laser-guided bombs sold to them by the United States and requested to be resupplied. As a result, the Saudi decision to continue the war is dependent on a policy decision by Washington.
The Obama administration knows very well that the reckless Saudi war in Yemen has serious consequences for US political and security interests in the Middle East. The war is not only disintegrating Yemeni society, but also is creating more opportunities for al-Qaeda in the Arabian Peninsula – the most dangerous affiliate of the terrorist organization – to recruit, train and plan jihadist operations against the United States.
The United States thus has strong policy and legal reasons for pressuring Saudi Arabia to end the carnage in Yemen, as well as very significant leverage on the Saudis. But the Obama administration has been unwilling to do anything consequential in response to Saudi defiance toward the UN-mediated cease-fire and political negotiations.
The Obama administration shows no sign that it intends to use the Amnesty report on Saudi war crimes to force the war issue. In response to a request from Truthout for a comment on the Amnesty report’s findings and the apparent illegality of resupplying further munitions to the Saudis, a senior administration official did not respond except to acknowledge that the administration is “studying” the report.
The official then repeated word for word an anodyne statement that a State Department official had given to Sputnik News on September 17: “We have asked the Saudi government to investigate all credible reports of casualties resulting from coalition-led airstrikes and, if confirmed, to address the factors that led to them.”
Unfortunately, major US news media have supported the administration’s evasion of the issue by choosing not to report on Amnesty’s explosive report on war crimes.