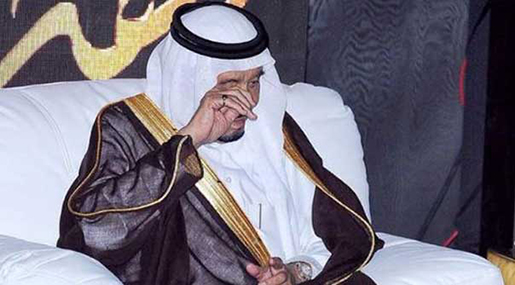 Althawra Net
The Saudi foreign minister Adel Jubeir does not stop threatening with the military option in Syria. Jubeir knows that no one in the world takes his threats seriously. He knows that the time when [only] one side [of the conflict] would flex its muscles is over. Essentially, the leading Saudi diplomat understands that the situation of the Kingdom after it entered Yemen does not please neither the friend nor enemy, so what situation will it be in following Russia’s entrance into Syria, and the phase after the downing of the Sukhoi?
The ruling family in Saudi Arabia continues to send signals of strength. It does this outwardly via media statements…such as adding Hizbullah figures and associations on the terror blacklist for example. Yet in actual fact, the ongoing Saudi aggression on Yemen has run its course. The Yemeni army and Ansarullah have turned Saudi Arabia’s magic on itself, and upon the multinational coalition. Saudi obstinacy no longer has any effect, as the losses are too big to count, and Washington’s patience has run out.
Far from the heroic antics of Jubeir and the stories of “Al-Arabiyah”, sources confirm to “Al-Ahed News” what was revealed by the famous Saudi tweeter “Mujtahid” yesterday, that the deputy Saudi crown prince Mohammad bin Salman told an Omani mediator that he is ready to stop the war on Yemen on two conditions only. Firstly, [Yemeni forces] must move away from the Kingdom’s borders, which are now largely under the control of Ansarullah and the Popular Committees. Secondly, guarantee that the [former] President Abed Rabbuh Mansour Hadi who fled and his government in Aden will be left untouched.
The concerned sources clarify that what was revealed by “Mujtahid” yesterday was not the full story. The sources say that a British delegation landed in Iran a few days ago, and it relayed its officials the message of the Saudis to the effect that the Saudi crown prince Mohammad bin Nayef, and the deputy crown prince Mohammad bin Salman, are now fully ready to stop their war on Yemen and its people, after they both realised that it will not bring about any result. The British mediator requested from the Iranian side a certain timeframe for the two Mohammads, to organise a “honourable ceasefire” in Yemen. The sources say that Washington is privy to this offer, which will be relayed to the Houthis via the Iranian side.
Therefore, the Americans know well the Saudi offer. Essentially, the sources say that the Americans are angry with the poor Saudi performance in Yemen, especially after they lost more than one opportunity to improve their situation on the ground, such that the Yemeni side loyal to them does not have any military or political influence that it can use to effect any change of developments there. The last deadline that the Americans gave the Saudis in Yemen was in Taiz, following a Saudi-Emirati request.
The American condition was that Taiz will be the final chance for the Saudis and their allies to improve their situation before heading to a settlement, regardless of whether they were successful in this attempt or not, especially following the Saudi failure in the face of the perseverance [of Yemeni forces] in Ma’rib. Today, the situation of Saudi Arabia and its allies in Taiz is very bad…in actual fact, the Saudis do not have any [positives] to talk about in Taiz. The clashes between the al-Islah party of the Muslim Brotherhood, and the Emirati forces – who are allies of the Saudis – are the best testimony of their failure over there.
What we have mentioned is not everything that the British mediators brought to Tehran. The British informed the Iranians as well, that Mohammad bin Salman in particular seeks some time in order to resolve several problems he is facing, whether that be issues related to [internal Saudi] power [relations], or in economic projects. For their part, the British urged the Iranians to encourage the Ansarullah to accept a ceasefire and to pull out of Saudi territories, in exchange for a guarantee – in the period following the aggression – of global recognition for them as an influential power in Yemen. This would mean recognition of a Houthi role in any future government that would decide the fate of Yemen.
Here ends the Saudi offer that came via the British mediators. However, the Iranians did not stop receiving [various] mediators and offers. For their part, the Emiratis were in contact with Tehran with regards to the war on Yemen. The Emiratis communicated directly with Iranian officials. [The Emiratis] told them that war on Yemen was never on their agenda, and it is not today either, despite all the roles they played within it. The Emiratis said that their entrance into the war was to appease the ‘older sister’ [Saudi Arabia].
As for today, with the ‘sister’ interested in leaving the battle, the Emiratis found themselves more in a position to arrange an honourable exit from the conflict. For this reason, the Emiratis informed the Houthis via the Iranians of their intention of withdrawing soon from Yemen. Due to this, they reduced the number of their forces from several thousands, to a few hundred. “Iyaal bin Zayid” requested from the Houthis not to target them, pending an arrangement of a withdrawal soon from Yemen.
According to the above, it is clear that Yemen is on the verge of a new phase. Especially since the Saudis and Emiratis have linked what they offered with a specific, short-term deadline. Based on this new situation, many regional issues of less importance for the Saudis will be resolved, based on the give and take rule, regardless of whether the “offers” of Saudi Arabia are still expensive on the regional and international market.