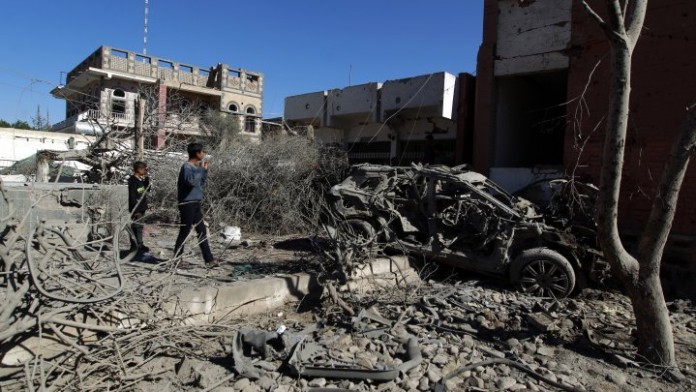 The United Nations on Friday decried the “carnage” caused by recent air strikes by a Saudi-led coalition in Yemen, saying the alliance was responsible for the vast majority of civilian deaths in the conflict.

“Looking at the figures, it would seem that the coalition is responsible for twice as many civilian casualties as all other forces put together, virtually all as a result of air strikes,” UN human rights chief Zeid Ra’ad Al Hussein said in a statement, expressing outrage at one of the deadliest air strikes on a market this week.

Since the Saudi-led coalition began its air campaign in Yemen a year ago, the UN rights office said it had tallied just under 9,000 civilian casualties in the conflict, including 3,218 killed.

It condemned “the repeated failure of the coalition forces to take effective actions to prevent the recurrence of such incidents, and to publish transparent, independent investigations into those that have already occurred.”

“Despite plenty of international demarches, these awful incidents continue to occur with unacceptable regularity,” he said, warning that “we are possibly looking at the commission of international crimes by members of the coalition.”

The United Nations on Thursday put the death toll from those strikes at 119, and Zeid’s office said Friday 106 of those killed in the crowded market were civilians, including 24 children.

“The carnage caused by two air strikes on the Al Khamees market … was one of the deadliest incidents since the start of the conflict a year ago,” Zeid said.

Meanwhile, his staff on the ground “could find no evidence of any armed confrontation or significant military objects in the area at the time of the attack,” besides a small checkpoint 250 metres away, the statement said.

That attack came just weeks after a similar incident, in which air strikes on February 27 on a market in a northeastern district of Sana’a killed at least 39 civilians, including nine children.

“I urge both sides to swallow their pride and bring this conflict to a halt,” Zeid said.