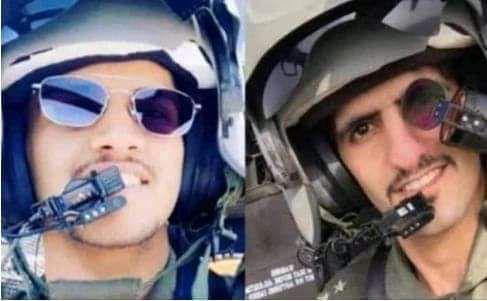 Saudi Arabia has admitted the deaths of two of its pilots in what it called the “crash of their Apache helicopter in Yemen.”

This coincided with broadcasting of video footage scenes by the military media of the Yemeni army on Saturday, showing the moment when a surface-to-air missile hit the Apache helicopter in Majazah area off Asir region.

A father of one of the Saudi pilots, commented on Twitter. “My son, Captain Pilot Abdul Majid Mohammed al-Omari, was martyred while defending religion, homeland and holy places and in response to the call of duty,” he claimed, using the typical Saudi propaganda pretending that they fight in Yemen in order to defend Mecca and Medina.

“A Saudi Apache plane was shot down on Friday morning in a district off Asir province with a surface-to-air missile,” Yemeni armed forces spokesman Yahya Sare’e had said earlier. “The Apache helicopter was downed while it was carrying out hostilities, and it was burned completely and its two pilots were killed.”

“Yemeni Armed Forces confirm that approaching the airspace of Yemen is prohibited. It will not be a place for a picnic for anyone and we will address all attempts by enemies until we reach the full protection of Yemeni airspace,” he added.

According to Al-Arabiya channel, Saudi Arabia “owns approximately 82 Apache AH-64D aircraft. Saudi pilots have been trained intensively, both internally and externally, and have achieved advanced positions among the world’s countries.”

The $100 million a piece Apache helicopter “is highly armed, equipped with more than 100 laser-powered missiles that penetrate shields with a range of more than 14 kilometers, and a 30-millimeter machine gun.”

It is often described as an “air tank”, features sophisticated precision-identified techniques, for the execution of an attack from close range or in depth so as to destroy the enemy and weaken its forces.”

One of Apache’s most prominent technologies is the “thermal missile stealth system by reducing the thermal emission of its engine by air cooling suitable around the fuselage, and releasing infrared radiation at different frequencies to mislead tracking devices.”

Despite all these state of the art technology, the Apache helicopter apparently won’t survive a war in Yemen, faced with the resistance of the military forces and Popular Committees.