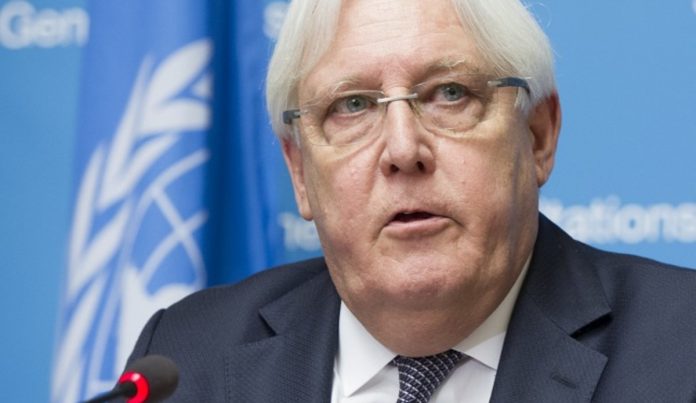 politicians and activists on social media considered the United Nations envoy to Yemen, Martin Griffiths, a tool of war, not a peace envoy.

The politicians on the social networking site “Facebook” and “Twitter” launched the label #Griffith_Envoy_of_aggression, and accused him of participating in the murders of children and women in Yemen through the aerial bombardment of the alliance or starvation due to the siege.

They considered the UN envoy, “Martin Griffiths” part of the problem and an envoy to Britain and Saudi Arabia to pass their projects in Yemen.

Although the UN envoy’s mission for Yemen, Martin Griffiths, required neutrality with all parties, but the great part of his mission have become missing, since he became from the peacemaker into the sponsor of the war waged by the Saudi-led aggression coalition against Yemen for straight six years.

Griffiths seeks to cut off half of the salary paid by the National Salvation Government through his explanations that “Sanaa withdrew its revenues supplied in Hodeidah Bank’s account that were unilaterally supplied in the bank, which he has ignored that the other party backed by the coalition has obstruct the payment of salaries and refused to pay salaries despite Sanaa providing solutions and supplying its revenues to a special account in the Central Bank branch in Hodeidah.

Additionally, the United Nations, through its international envoy, renounces the fulfillment of its obligations, abandons the agreements being sponsored and obligated to pay the salary, has announced the suspension of arrangements for paying the salaries, which proves that the UN humanitarian claims are nothing and it is just banners raising to deceive the world opinion.

The head of the national negotiating delegation, Mohamed Abdel Salam, said on his Twitter page, that the UN envoy, Martin Griffiths, separated from his mission of neutrality and fairness, and he became involved with the forces of aggression on Yemen, and fully adopted their thesis, which is what It makes him a participant in prolonging the war of aggression against the Yemeni people.

As well as , the Acting Chairman of the Higher Economic Committee, Central Bank Governor Hashem Ismail confirmed, the fallacies contained that Griffiths turned against Stockholm agreement by justifying it to prevent the entry of oil derivatives.

The Acting Chairman of the Higher Economic Committee said in an interview with Almasirah newspaper that “Griffiths deliberately presented a misleading picture about the fate of the revenues of Hodeidah ports, even though he knew that they were spent on salaries.

He noting that the UN envoy clearly adopts the aggression agenda and does not talk about the looted revenues of the other party.

“If the UN is serious, we can pay all the wages in one week,” acting chairman of the supreme economic committee in Sanaa, Hashim Ismail, said.

Ismail clarified that the economic situation is still bad and is being run in a way that serves the military agenda of the aggression. He revealed that the UN envoy called the Supreme Economic Committee to discuss the economic file and the other party refused to participate.

The ambassador of the Republic of Yemen to Iran, Ibrahim Al-Dailami, considered that the UN envoy recorded a major failure during his time in Yemen at all levels.

For his part , Finance Minister, Rashid Abu-Lahom, confirmed that the Ministry of Finance has submitted all documents to the United Nations that it has spent the balance accumulated in the salary initiative to pay out half of the salary to employees.

In a statement, Abu-Lahom told Almasirah that “the United Nations and the pro-US-Saudi aggression party were embarrassed by our ability to pay half a salary on a regular basis and they prevented ships from reaching the port of Hodeidah.” Abu-Lahom pointed out that the United Nations wants the National Salvation Government to keep these amounts in the account without any horizon for the issue of paying out half of the salaries as agreed upon.

The politicals also condemned the international community’s silence on the siege of the city of al-Duraihemi and the prevention of the delivery of food, medicine, and humanitarian aid to the besieged city, who are constantly being bombarded by the aggression forces.

They called on the international community, the United Nations, and humanitarian organizations to stop the aggression, lift the blockade, and take responsible positions against the continued arbitrary practices on the Yemeni people.

The statement warned of the ongoing denial of access to oil derivatives would have serious repercussions affecting the lives of millions of civilians and causing catastrophic damage to economic, service, and development activities.

During the handover of the statement, director of the Telecommunications Corporation branch Ali Hiba Makki and deputy director of the Hodeidah Postal Office Hussein Habib confirmed that the deliberately seizes oil of vessels by the aggression coalition pose a direct threat to the services of the two institutions and may cause them to stop, which results in depriving hundreds of thousands of peoples of telecommunications, internet and post services.

The Minister of Oil and Minerals, Ahmed Dares also affirmed that the United Nations did not respond to the humanitarian appeals and calls that launched by authorities in Sanaa

During a protest rally that held in front of the UN headquarters in Sanaa, the minister affirmed that the vital sectors and services would be stopped in the coming hours as a result of lack of the Yemeni Oil Company’s storage of oil derivatives.

Dares stressed that called on the United Nations to move for releasing oil derivatives ships being detained by the Saudi-led aggression coalition countries.

The minister said that the United Nations should be ashamed of the Yemeni people’s demands and appeals and carry out its duties in pressuring the coalition countries to release oil derivative ships and allow their entry into Hodeidah port to alleviate suffering of the Yemeni people.

He held the United Nations fully responsible for the repercussions of the humanitarian catastrophe that threatens the Yemeni people in the event that ships continue to be detained.