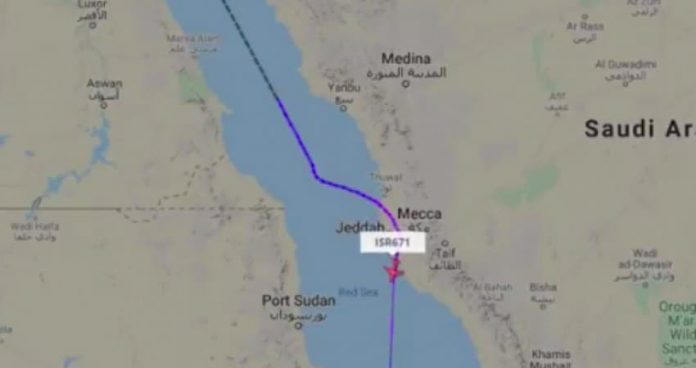 An Israeli plane has flown over the airspace of the holy city of Mecca during its flight to India, the Hebrew daily Yediot Aharonot reported Monday.

This come in a tweet by Itay Blumental, aviation editor for Yediot Aharonot newspaper.

According to the newspaper, the Israeli flight “was forced to make a detour into Saudi Arabia. Saudi air-traffic control assisted the plane the entire way,” the airline said in response to a reporter who noted the strange route that the plane took from Ben Gurion Airport to India.

Saudi Arabia is not among the countries to have officially normalised ties with Israel as a part of the Abraham Accords, but it did decide to open its airspace to all Israeli flights traveling east from the Zionist settler entity.

Itay Blumental, wrote: “Very beautiful: an Israeli plane took off yesterday from Ben Gurion Airport (Tel Aviv) to India via Ethiopia and did not give up visiting the skies of Jeddah and Mecca in Saudi Arabia.”

The Israeli journalist attached the tweet with a document of a company tracking the movement of aircraft showing the plane flying in a straight path over the Red Sea before turning left and passing over the cities of Jeddah and Mecca.

There was no immediate comment from the Saudi authorities on the matter.

At the time, the official Israeli broadcasting organisation said that Saudi Arabia had agreed to open its airspace for the plane.

The UAE and Bahrain signed agreements to normalise relations with the Zionists in mid-September at the White House, under the auspices of US President Donald Trump.