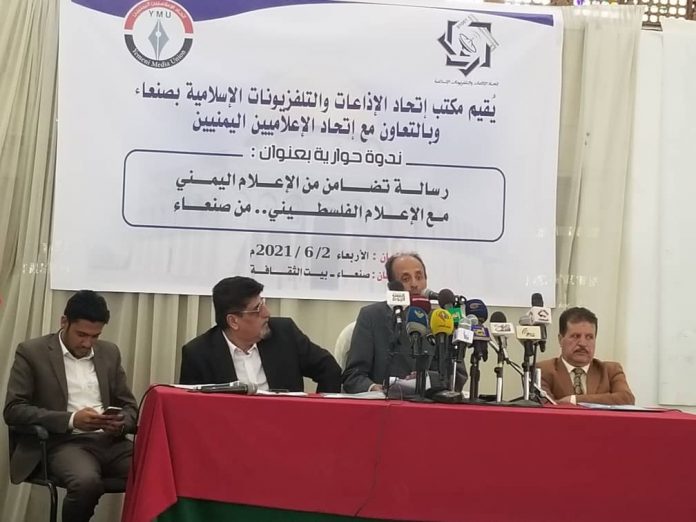 The Islamic Radio and Television Union, in cooperation with the Yemeni Media Union, has on Wednesday organised an intellectual symposium in the capital Sana’a tilted “From Sana’a: A message of solidarity from Yemeni media with Palestinian media.”

In the second document, researcher and political analyst Abdel Ghani al-Zubaidi addressed “a message of solidarity from the Yemeni media with the Palestinian media”.

The document focused on “confronting the Arab Zionists” and emphasised the Yemeni media coverage of the recent Zionist aggression on Gaza.

The third document, written by a Palestinian activist in Sana’a, Dr. Magdi Azzam, focused on the aggression against Gaza.

Azzam reviewed the facts and figures of the recent Zionist aggression against Gaza, which left 265 martyrs, most of them children, women and elderly.

“We see two images for two countries in one continent that are being subjected to criminal aggression: Yemen and Palestine”, said Azzam.

“This confirms that the enemy is one. The masks of governments that rushed to normalise relations with Israel have fallen down. These trends do not reflect the convictions and demands of the people under these regimes, including Saudi Arabia, Bahrain and the United Arab Emirates,” he explained.

Journalists and intellectuals on Wednesday demanded that a Yemeni media bloc be established in order to support the Palestinian cause and expose the crimes of the Zionist entity in the region.

The participants in the symposium called for exerting efforts to defend the Palestinian cause, which is considered the central priority of the nation and the Yemeni people.

The symposium’s recommendations urged the exposing of the slogans of the United Nations regarding human rights and emphasising that “Yemen and Palestine are one body and their cause and demands are one.”