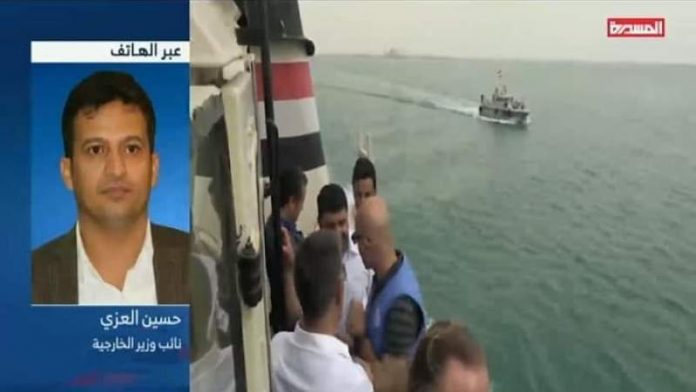 The Ministry of Foreign Affairs expressed concern about Safer Tanker and the delay in the arrival of the urgent maintenance and comprehensive assessment team regarding the agreed framework.

Deputy Foreign Minister Hussein Al-Ezzi said, Sunday, “The insistence of preventing the entry of diesel fuel to the tanker since 2016 increases our concern, despite our constant and continuous appeals.”

Al-Ezzi added, ” today’s ignorance towards the pollution that has befallen the coasts of Aden is unfortunate, and we fear that there is a systematic tendency to damage our waters.”

He continued, “The world is aware of the large ban imposed on Sana’a. Sana’a can -through local experts- carry out maintenance without the need for any party, however the US-Saudi siege prevented the entry of diesel and the necessary equipment.”

An abandoned oil tanker has sunk off Yemen’s southern coast spilling out fuel into the Gulf of Aden and along the country.

Reports indicated that the vessel is one of several dilapidated tankers in the same area all likely abandon and in need of maintenance. The most high-profile case is the FSO Safer, a 45-year old tanker converted to serve as floating storage.

In November 2020, Deputy Foreign Minister, Hussein Al-Ezzi, confirmed that a letter was sent from the Ministry of Foreign Affairs to the United Nations welcoming the team of experts in charge of assessing and maintaining the Safer.

Al-Ezzi said on his Twitter account: “We sent a message to the United Nations in which we welcomed the team of experts in charge of assessing and maintaining the Safer ship, and we are still awaiting the arrival date of the team to Yemen.”

The Supervisory Committee for the Implementation of the Safer Agreement expressed on Thursday its deep regret over the non-compliance of the United Nations Office for Project Services (UNOPS) with the agreement signed in November 2020.