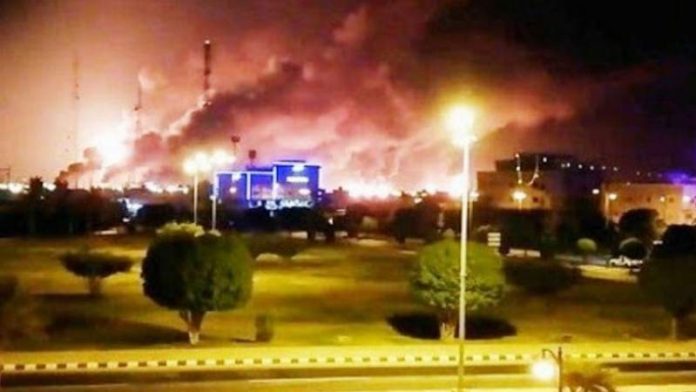 Seven ‘Balanced Deterrence’ Military Operations were carried out by the Yemeni Armed Forces on targets of military and economic importance, has made the enemy lose its balance and its ability to confront the Yemeni strategy.

These operations, in addition to their severe military and economic effects, left the most painful psychological impact on the coalition forces. A psychological defeat had made them lose the ability to achieve anything within the framework of their military confrontation.
1st ‘Balanced Deterrence’ Operation

On August 17, 2019, the Yemeni Armed Forces spokesman, Brigadier General Yahya Sare’e, announced the largest offensive drone operation targeting Saudi Arabia since the start of the war on Yemen, which was called the “1st Balanced Deterrence’ Operation.

He confirmed that the operation was carried out with ten drones targeting Aramco’s Shaybah oilfield and refinery, in the east of Saudi Arabia, which includes the largest strategic stockpile with a capacity of more than one billion barrels per day.

On the 14th of September, 2019, Brigadier General Sare’e revealed the bombing of the Abqaiq and Khurais fuel refineries of Aramco in the far east of Saudi Arabia, with a massive offensive operation including ten drones. He explained that the Yemeni Air Forces targets sensetive target, accurately, explaining that the operation came “after an accurate intelligence operation, monitoring and cooperation from honorable and free people inside Saudi Arabia.”

On February 21, 2020, the Rocketry Force and the Air Force targeted the Saudi depth, specifically Aramco and other sensitive targets in Yanbu, with 12 Sammad-3 drones, two Quds winged missile, and a Zulfiqar long-range ballistic missile.

At the time, Brigadier General Sare’e made it clear that it came as a natural and legitimate response to the Saudi-led forces crimes against civilians in Yemen.

4th ‘Balanced Deterrence’ Operation
On June 23, 2020, in this operation, Yemeni Armed Forces struck Saudi Arabia, Riyadh with a large number of ballistic and winged missiles and drones, and the largest offensive operation.

The statement of the Yemeni Armed Forces confirmed that the operation targeted Saudi Ministry of Defence, Inelegance, Salman Air Force Base and other military targets in Riyadh, Jizan and Najran. It was carried out with a large number of ballistic and Quds winged missiles, Zulfiqar and the Air Forces drones.

On March 7, 2021, in this operation, the largest oil port in Saudi Arabia was targeted. Brigadier General Yahya Sare’e revealed that Yemen’s Air Force and Missile Force carried out a large and joint offensive towards Saudi depth with 14 drones and 8 ballistic missiles, including 10 Sammad-3 drones and the Zulfiqar missile.”

He explained that the attack targeted Aramco in the port of Ras Tanura, and other military targets in the Dammam area in the 6th Balanced Deterrence Operation. Other military sites in Asir and Jizan were also targeted with 4 Qasef-2K drones and 7 Badr missiles.

September 5, 2021, the 7th Balanced Deterrence Operation was announced by Brigadier General Sare’e, which struck vital installations and military bases in the Saudi depth, was implemented.

He sent a warning to the Saudi enemy of the consequences of its continued aggression against “our dear country and our steadfast people.”

He also stressed Yemen’s legitimate right to carry out more qualitative military operations in defense of the country and its people until the aggression stopps and the siege is lifted.

“The Yemeni Armed Forces are continuing in their battle until the liberation of all the lands of Yemen and achieving freedom and independence,” Sare’e affirmed.