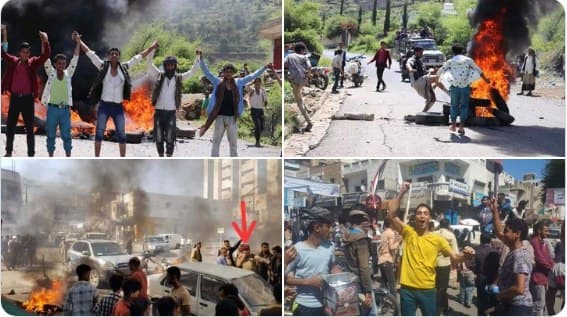 The city of Taiz, southwest of Yemen, witnessed clashes on Monday between demonstrators and the security forces of the pro-aggression government.

A number of popular demonstrations took to the streets, denouncing the difficult living situation and the decline in services, in addition to the historical collapse of the national currency.

The demonstrators blamed the mercenary  government and the Saudi-led aggression forces for the crisis, chanting slogans for the departure of the coalition’s forces saying, “No coalition anymore.”

The demonstrators also tore down and removed the pictures of the exiled Hadi, the head of the mercenary government.

According to Yemeni medical sources, a citizen died and others were wounded by the bullets of the security forces and the Islah party.

Meanwhile, the city of Al-Turbah, west of Taiz, witnessed similar demonstrations. The city’s residents closed the streets with burning tires in protest against the deteriorating living conditions.