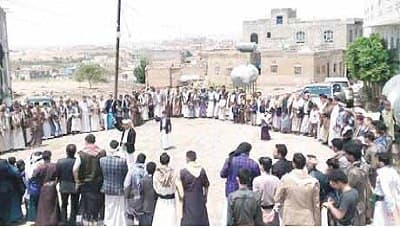 Yemen Petroleum Company employees, Tuesday, with the participation of employees of the Ministry of Electricity and Energy, organized a protest sit-in in front of the United Nations building in Sana’a to condemn the aggression’s detention of fuel ships and the continuation of the siege.

The protesters held the US-Saudi aggression coalition and the United Nations all responsible for the humanitarian situation in Yemen, especially the hospitals and the electricity and water sector, due to the detention of fuel ships by the brutal aggression navy.

A statement issued by the stand pointed out that the continued detention of fuel ships doubles the suffering of the electricity sector and basic and vital services in the country in terms of health, water, sanitation, storage, refrigeration, agriculture and others.

The statement pointed out that the continued detention of fuel ships had a direct impact on citizens, especially patients in hospitals and the displaced, which portends a catastrophe with the advent of winter.

The protesters called on the United Nations to fulfill its humanitarian responsibilities and pressure to enter the necessary fuel to save the lives of Yemenis, calling on the free people of the world to unite and work to lift the unjust siege on the Yemeni people.