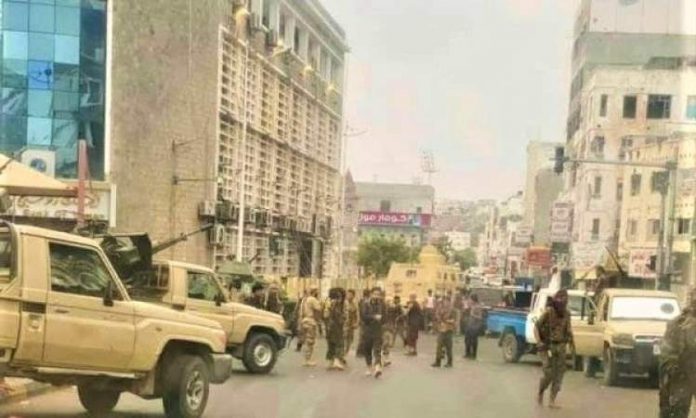 Violent clashes erupted between the Emirati-backed Southern Transitional  Council (STC)”s factions, during the early hours of Sunday morning, in the city of Aden.

“The clashes erupted between the security belt factions, and armed men from the Khor Maksar region police, with various types of light and medium weapons,” local sources said.

The sources indicated that members of the Fourth Battalion in Security Belt militia attacked the police in Khor Maksar, following the death of one of the battalion’s members Ghamdan Qassem Al-Shaeri on Saturday from wounds sustained in the attack of a point belonging to the Security Belt last month, in coast Abyan.

The sources did not mention the losses caused by the clashes between the STC militia factions in Khor Maksar.

The occupied governorates suffer from the deteriorating living and economic conditions and the spread of armed groups of all kinds in light of the ongoing conflict between the wings of the invaders and occupiers on the ground.

The city of Aden and other occupied cities witnessed during the recent period protests and demonstrations due to the spread of poverty, the deterioration of public services and the deteriorating economic conditions.

During the last period, the Security Belt forces carried out a large-scale campaign of arrests that affected many young men who went out in demonstrations condemning the poor living conditions.