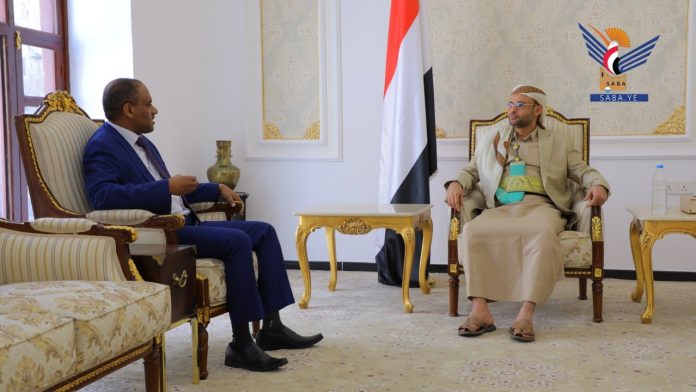 President of the Supreme Political Council, Mahdi Al-Mashat, called on the people of the Socotra province to preserve the social fabric, work to thwart the plans of the aggression coalition that loots the wealth and capabilities of the province.

This came during his meeting on Monday with Socotra governor, Hashem Al-Socotri, to discuss the looting and tampering of the occupying forces on the island.

During the meeting, President Al-Mashat was briefed by the governor on the latest developments in the archipelago as a result of the absurd practices of the UAE occupation forces with US-Zionist support, the systematic looting of resources, fish and animal wealth, antiquities, as well as deliberate tampering with environmental diversity in the province.

Mr. President renewed his condemnation of the criminal acts against Socotra by the forces of aggression coalition in targeting the Yemeni identity of the people of the archipelago, bringing about demographic changes.

He pointed to the violations of the occupation forces in the archipelago by cutting and transporting rare trees and birds and destroying marine life, in flagrant violation of international conventions and treaties.