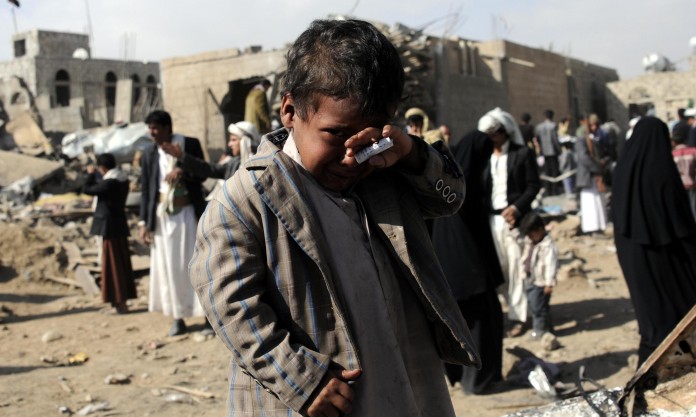 A senator from Connecticut is raising big questions about America’s unwavering support for Saudi Arabia. His comments come as the Saudis and their Arab allies begin a second year at war in Yemen. Fighting there in the past year has killed more than 3,000 civilians, many with US-made weapons.

Saudi Arabia buys more US weapons than any nation in the world. US support does not end at weapons sales. The United States military advises the Saudi-led coalition as it conducts its air war in Yemen.

Connecticut Democrat Chris Murphy, a member of the Senate Foreign Relations Committee, asks why the US has stood by while the Saudi-led coalition of Arab air forces has pounded Yemen daily since March 26, 2015.

“It’s hard for me to figure out what the US national security interests are inside the civil war in Yemen,” says Senator Murphy.

Saudi Arabia buys more US weapons than any nation in the world. US support does not end at weapons sales. The United States military advises the Saudi-led coalition as it conducts its air war in Yemen.

On Tuesday, March 15, jet fighters from the Saudi-led coalition struck a crowded marketplace at midday in Khamis, a village north of the Yemeni capital, Sanaa. Doctors Without Borders/Médecins Sans Frontières reports “Khamis was full of people who had gathered for the weekly market day. Dozens of civilians were present at the time of the airstrike, including women, children and the elderly, and many were injured or killed in the attack.” There are no military targets in Khamis.

“It appears that our support for the Saudi-led bombing campaign is killing a lot of civilians,” says the senator. “It is leading to a humanitarian disaster, and strengthening the very groups that we say are our priority to defeat in the region.”

The chaos of war has opened opportunities for Al Qaeda in the Arabian Peninsula and ISIS to expand their areas of control and strike targets. Senator Murphy thinks US support for the Saudi campaign, which includes targeting assistance and mid-air refueling of fighter jets, is undercutting America’s true objectives in Yemen, to reduce the threat of AQAP, which has launched several failed attacks on mainland US targets.

In the past year alone, the United States has agreed to resupply Saudi Arabia with $1.29 billion in bombs that have been expended in daily airstrikes on Yemen.