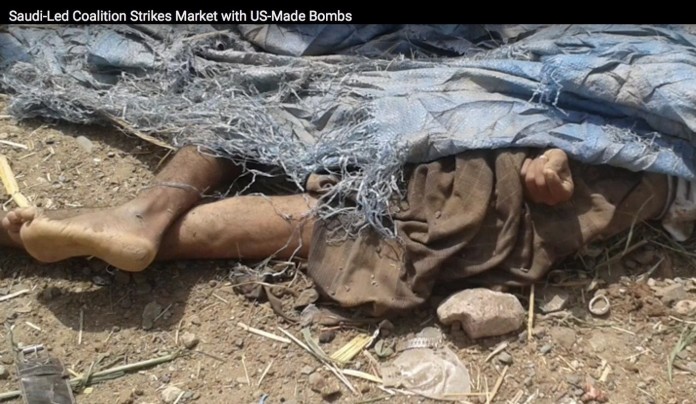 Last month, in Yemen, I found myself in the northern village of Mastaba, investigating a Saudi-led coalition airstrike in which two U.S.-supplied bombs killed at least 97 civilians and 10 fighters in a crowded marketplace. The unlawful attack may have been a war crime.

Welli said that Hadi’s forces whih are backed by the Saudi coalition, had crossed the border from southern Saudi Arabia, where they were trained and armed.

Foreign Affairs Minister Stéphane Dion recently announced that Canada was proceeding with a $15-billion sale of Light Armored Vehicles, known as LAVs, to Saudi Arabia. My question to Mr. Dion is this: What confidence do you have that the Saudis have not armed these pro-Hadi forces, which are backed by the Saudi coalition, with LAVs? The Saudis have used such vehicles to violently suppress peaceful protests in eastern Saudi Arabia in 2011 and 2012. And should Canada be selling military weapons and materiel to the country chiefly responsible for dozens of unlawful attacks in Yemen that have killed hundreds of civilians?

During the short time he has been in office, Prime Minister Justin Trudeau has already brought a new Canadian perspective on human rights and humanitarian action to the broader world. So in light of the increasing global backlash against Saudi violations in Yemen, Mr. Dion’s announcement about the military sales was something of a surprise. His concern that cancelling the military deal could jeopardize an education exchange for Saudis studying in Canada seems misguided when you meet people like Hassan Obeid, who lost 17 members of his family in the Mastaba marketplace bombing.

Human Rights Watch has called for the United States, the United Kingdom, and other countries to suspend all arms sales to Saudi Arabia, given its leading role in widespread laws-of-war violations in Yemen. According to the United Nations, since the coalition began its military campaign on March 26, 2015, 60 per cent of the more than 3,200 civilian deaths have been from coalition airstrikes. We have documented 37 unlawful air strikes that alone have killed more than 650 civilians, as well as 15 attacks involving internationally banned cluster munitions. The United Nations Panel of Experts on Yemen established under UN Security Council Resolution 2140 (2013), in a report made public on January 26, “documented 119 coalition sorties relating to violations” of the laws of war.

Despite an announced ceasefire on April 10, airstrikes and ground fighting have continued across Yemen.

There is a growing movement among concerned countries to deprive Saudi Arabia of the means to commit abuses in Yemen. The European parliament passed a resolution on Feb. 25 calling on the European Union’s high representative for foreign affairs and security policy, Federica Mogherini, “to launch an initiative aimed at imposing an EU arms embargo against Saudi Arabia.” On March 15, the Dutch parliament voted to impose the embargo and to ban all arms exports to Saudi Arabia. On April 13, two U.S. senators introduced legislation to temporarily block U.S. arms sales to Saudi Arabia until the State Department certifies that the Saudi military is taking all available steps to protect civilians. On April 20, the Swiss government blocked military exports worth $19.5-million (U.S.) to several Middle Eastern countries that it suspected could wind up fuelling the war in Yemen.

It’s hard to predict whether the new LAVs will be used in war crimes in Yemen. But the Saudi record in the current conflict is so bad, and the disregard for the lives of civilians has been so great, that one would think that the new Canadian government would want to part of the growing opposition to arms sales to Saudi Arabia, not part of the problem. Blocking the sale would be sending the right message to Saudi Arabia, to the world, and to long-suffering civilians in Yemen.

Belkis Wille is the Yemen researcher at Human Rights Watch