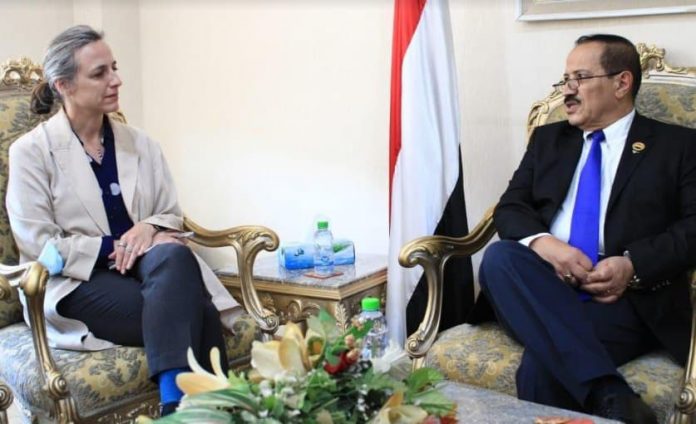 Foreign Minister Hisham Sharaf has met with new Director of the Office of the Special Envoy of the Secretary-General of the United Nations for Yemen Roxane Bazargan on the occasion of assuming her duties.

In the meeting, the Minister affirmed keenness to provide all facilities to the new Director of the Office of the UN Envoy for the success of her office’s tasks.

Sharaf explained that the continuation of aggression and siege is a major cause of the humanitarian catastrophe that Yemen is witnessing and a threat to peace and security in the region.

He stressed that the political leadership in Sana’a is serious in pursuing the path of peace and has presented many initiatives that were met with the intransigence of the aggression and its tools through the illogical link between the humanitarian file with Military and political files.

Minister Sharaf expressed his regret for the aggression countries’ insistence on closing Sana’a International Airport in front of commercial and civil flights and obstructing the entry of ships loaded with oil derivatives, domestic gas, and commercial goods to the port of Hodeida.

He pointed to the importance of taking measures to build human confidence, which creates the appropriate atmosphere and chances for the success of any consultations or negotiations to reach a sustainable, peaceful political settlement that serves the Yemeni people and preserves the sovereignty and independence of Yemen.

For her part, Bazargan indicated that the main task of the UN envoy, Hans Grundberg and his office, is to assist in stopping military actions and addressing the humanitarian situation so as to reach a sustainable peaceful political settlement in Yemen.