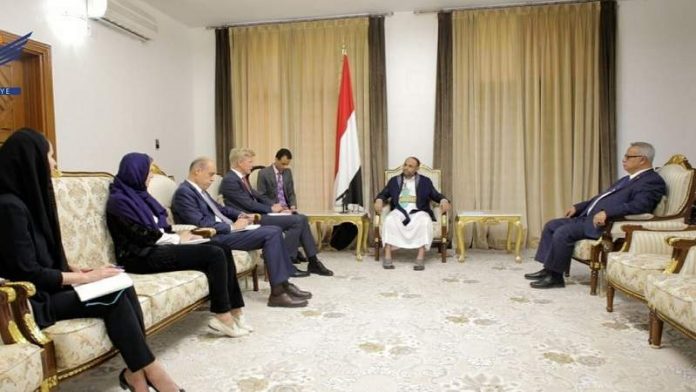 President of the Supreme Political Council, Mahdi Al-Mashat, on Wednesday met with the UN Special Envoy for Yemen, Hans Grundberg, and his accompanying team, in the capital, Sana’a.

During the meeting, they discussed the efforts of the United Nations to expand the truce in light of the intransigence of the Saudi-led coalition countries, which seek to empty any possible truce of its content.

President Al-Mashat said, “The injustice inflicted on the Yemeni people as a result of the aggression and the siege is very great, compared to the simple rightful humanitarian demands of the Yemeni people.”

He explained that the forefront of those demand is the payment of salaries of all state employees and pensions of retirees, and lifting the siege, especially in light of the continuous looting of the country’s sovereign wealth by the coalition, which can cover salaries for years.

He pointed out that the failure to alleviate the humanitarian suffering of the Yemeni people, which was deliberately made by the coalition, means that the coalition is the one who rejects the truce.

“We did not ask anyone to grant favor to our Yemeni people, Rather we demand his right to his oil, gas and other wealth, and that salaries be paid from them,” President Al-Mashat said. “And whoever prevents our people from his right, he does not expect us to give him roses.”