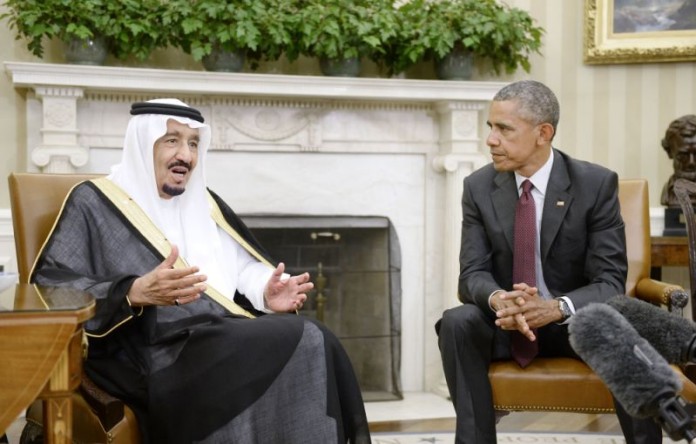 Foreign Policy( FP) reported exclusively today that Riyadh’s air war in Yemen has killed and injured hundreds of civilians and Washington is finally trying to stem the carnage.

“The White House has quietly placed a hold on the transfer of cluster bombs to Saudi Arabia as they continue their bloody war in Yemen,” U.S. officials told  Foreign Policy.  The FP report also said that It’s the first concrete step the United States has taken to demonstrate its unease with the Saudi bombing campaign that human rights activists say has killed and injured hundreds of Yemeni civilians, many of them children.

According to the report, the move follows rising criticism by U.S. lawmakers of America’s support for the oil-rich monarchy in the year-long conflict. Washington has sold weapons and provided training, targeting information, and aerial refueling support to the Saudi-led coalition fighting in Yemen. It has also sold Riyadh millions of dollars’ worth of cluster bombs in recent years.

John Hudson, FP reporter on diplomacy and U.S. national security issues, asked about the hold on the shipments, a senior U.S. official cited reports that the Saudi-led coalition used cluster bombs “in areas in which civilians are alleged to have been present or in the vicinity.”

“We take such concerns seriously and are seeking additional information,” said the official to FP, who spoke on condition of anonymity.

The hold applies to CBU-105 cluster bombs manufactured by the U.S.-based firm Textron Systems. According to Amnesty International and Human Rights Watch, Saudi-led forces have dropped CBU-105 munitions in multiple locations around Yemen, including Al-Amar, Sanhan, Amran, and the Al-Hayma port, according to Hudson.

The report pointed out that cluster bombs contain bomblets that scatter widely and kill or injure indiscriminately. Sometimes bomblets fail to detonate immediately and can kill civilians months or even years later. The weapons were banned in a 2008 international treaty that arms sales giants, including the United States and Russia, refused to sign.

“Responding to humanitarian concerns, the United States has scaled back exports of cluster bombs and demanded changes in the munitions’ performance, such as banning those with a higher fraction of submunitions that do not explode on impact.” Hudson reported. He added A 2009 U.S. law prohibits exporting cluster bombs that have a failure rate of above 1 percent. It also says the weapons cannot be used “where civilians are known to be present” and only against “clearly defined military targets.”

FP mentioned that the CBU-105 Sensor Fuzed Weapon has been touted for meeting the 1 percent requirement. But a February report by Human Rights Watch cited evidence the weapon was used in two attacks in Yemen, and had a failure rate that exceeded 1 percent. “The evidence raises serious questions about compliance with U.S. cluster munition policy and export rules,” said Steve Goose, arms director at Human Rights Watch.

The group has investigated at least five attacks in Yemen involving CBU-105s in four governorates since the war began. In December, the group documented an attack on the Yemeni port of Hodaida that injured a woman and two children in their homes. Two other civilians were wounded in a CBU-105 attack near Al-Amar village, according to local residents and medical staff interviewed by Human Rights Watch.

The Obama administration has issued several statements of “concern” about the violence in Yemen, but has yet to formally announce any reduction in military or tactical support for the coalition. A U.S. official touted the fact that Washington’s “engagement” with Riyadh has led to the kingdom’s commitment to an inquiry into civilian deaths in the conflict.

Prominent humanitarian groups told FP praising the decision to hold the sale of cluster bombs to Riyadh is not enough.

“Any step toward ending the production and sale of cluster bomb munitions by the United States government is a good thing, but much much more needs to be done,” said Sunjeev Bery, advocacy director at Amnesty International. He said his organization pushed — unsuccessfully — to block a $1.3 billion sale of smart bombs to Riyadh that the United States approved in November.