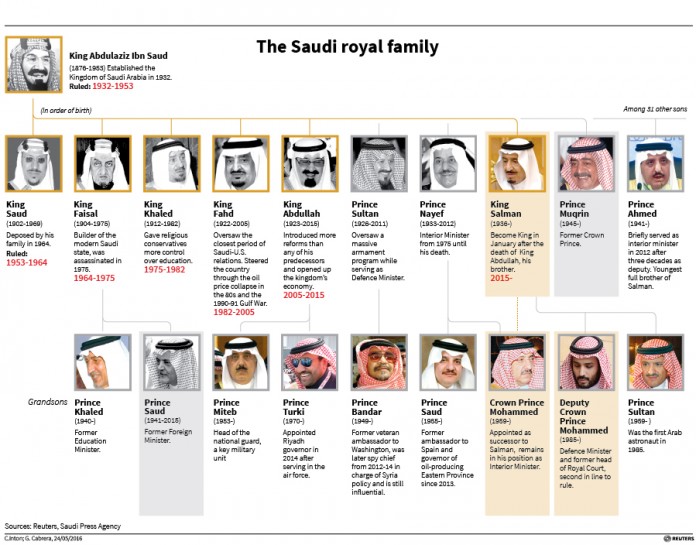 By: Andy Critchlow a Reuters Breakingviews columnist. The opinions expressed are his own.

Three main pillars bind Saudi Arabia together: oil, the ruling Al Saud family and Islam. Reforms are preparing the Middle East’s largest economy for the end of a reliance on the first. But they could have a destabilising knock-on effect on the other two.

Saudi as a modern nation was founded in 1932 by a powerful regional overlord known as Ibn Saud. Since then the family has monopolised power by doling out its vast petroleum wealth in the form of handouts and preferential business deals while maintaining an uneasy pact with an ultra-conservative domestic religious establishment. But a 62 percent slide in the price of crude since 2012 has forced the kingdom to cut benefits such as energy subsidies for the average Saudi. Buying support is about to get tougher.

The radical restructuring of the economy now being managed by Deputy Crown Prince Mohammed bin Salman – one of Ibn Saud’s many grandsons – is ambitious and not before time. The prince, widely known as ‘MbS’, last month presented the details of his Vision 2030 and short-term National Transformation Plan, with the aim of weaning Saudi off oil, which still accounts for over 70 percent of budget revenues. But although it’s a financial necessity for Riyadh to rein in a record budget deficit, politically the strategy is risky – it could prove unpopular in poorer rural tribal areas of the desert kingdom.

That would be okay if the 1000-plus princes of the Al Saud family were a unified bunch. But they are not immune to disagreements. After the death of the incumbent King Salman bin Abdulaziz, power will pass for the first time outside the direct line of Ibn Saud’s sons, which itself implies a less harmonious succession. The sudden elevation of the 31-year-old MbS, the current king’s son, looks a threat to his cousin Mohammed bin Nayef, who as crown prince is the official heir to the throne. It could also kindle resentment among the sons of previous rulers who were passed over, including those who don’t descend from the offspring of Ibn Saud’s most influential wife, Hassa bint Ahmed al-Sudairi.

The full brothers produced from this marriage, including the present king, are known as the ‘Sudairi seven’. For decades this group worked together to become the most powerful faction in Saudi politics, but those close blood ties have now been watered down – MbS and Mohammed bin Nayef are cousins, rather than brothers. As such they are less likely to co-operate as effectively as their fathers did, which could set up a power struggle. Then there are princes such as Miteb bin Abdullah – the son of the previous king – who have been sidelined but could feasibly make a play for power. Miteb controls the National Guard, which is the only sizeable organized military force outside the country’s army.

Discord among the Al Saud has some historical precedent. The family deposed Ibn Saud’s initial successor, replacing him with the more reform-minded King Faisal in 1964. Faisal is credited with modernising the kingdom by reforming the economy – he abolished slavery, for example. But he came to a bloody end when he was assassinated in 1975 by a young Al Saud relative. Faisal’s fate looms large in the minds of those tempted to be similarly reform-minded.

Finally, there is the royal family’s unwritten alliance with Wahhabism, the ultra-conservative school of Sunni Islam. Without the support of the clergy, Ibn Saud would have struggled to unify the country and his descendants would have probably lost control. Often linked with the spread of religious extremism and sectarian division, Wahhabism is perhaps the biggest barrier to Riyadh finding a peace with Iran and Shiite Islam, or achieving real social reform. Without significant changes, such as equal rights for women and the moderation of the strict religious legal system, lasting economic change is unlikely to succeed.

In a worst case scenario, internal family rivalries, regional religious forces and economic strain would undermine the ties that bind Saudi Arabia together. The kingdom could conceivably even fragment into disparate provinces governed by rival warlords, which would resemble how it looked before Ibn Saud unified the country. The consequences for Middle East stability would be profound.