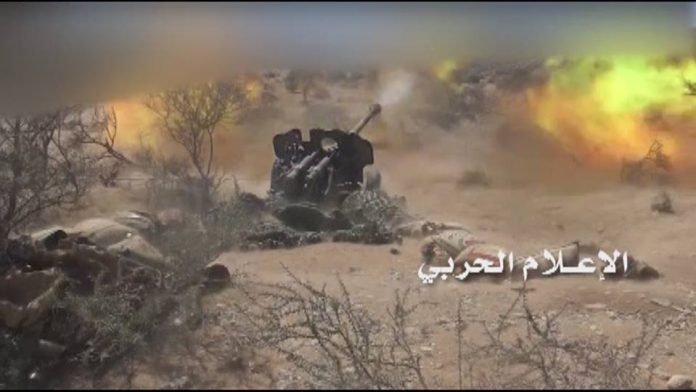 Army artillery an Popular Committees bombed  positions and gatherings of the Saudi army and its mercenaries in Jizan and Najran .

A military source said that the artillery of the army and the Popular Committees targeted gatherings of the Saudi soldiers in many positions in Jizan .

The source added that the artillery force of the army and the popular  committees bombed a group of mercenaries in al-Khdrah port  causing direct injuries .

On Sunday, a number of Saudi military soldiers  were killed  by the artillery of the army and the Popular committees in  alkhashal  position  and the gathering of Saudi soldiers on the network, al-Eibaara and al-Bayt al’-Abyad positions  .

Two military vehicles were also destroyed  carrying Saudi soldiers at Al-Zaqaylah position with a guided missile, as well as a sniper operation  at al-Friadh position  , in addition a military vehicle belongs  to the Saudi army burned  at  a new position  in Jizan .

A number of Saudi military soldiers were killed in a rocket attack at Sikam position in Najran.

The artillery also  bombed  the big almakhruq  positions and the fortifications of the Saudi soldiers west of the Najran .