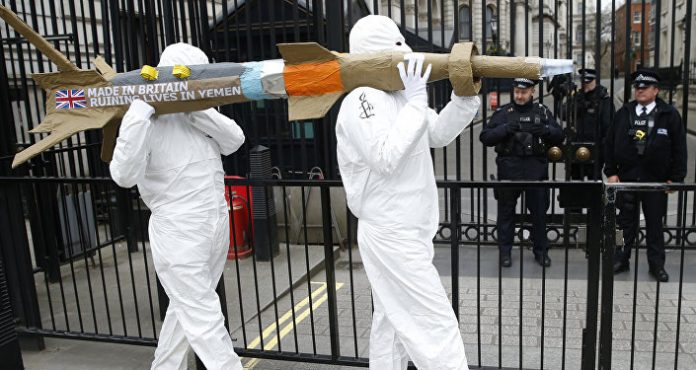 A majority of the British public believes the UK must end arms sales to Saudi Arabia over its large-scale slaughter of civilians in Yemen, according to a new poll.

An exclusive poll conducted by BMG Research for The Independent has found that 58 percent of people say it is wrong for Britain to supply billions of pounds of weapons to Saudi Arabia.

The poll also shows that 64 percent of the public want the government of Prime Minister Theresa May to release a suppressed report into Saudi Arabia’s funding of extremism in Britain, even if it damages relations with Riyadh.

On Wednesday, UK Home Secretary Amber Rudd cited national security reasons for not publishing a report commissioned by former Prime Minister David Cameron that shows the majority of foreign funding for extremism in the UK came from Saudi Arabia.

The survey underscores the public’s deep concern about the UK’s close relationship with an autocracy embroiled in a devastating war in Yemen.

The UK has licensed 3.3 billion pounds worth of weapons since the beginning of Saudi Arabia’s war on Yemen in March 2015.

The United Nations and other international organizations have accused the Saudi-led coalition of bombing hospitals, schools and wedding parties in Yemen.

The UN has declared Yemen a “humanitarian catastrophe,” with sanitation systems destroyed and at least 300,000 people infected with cholera.

The opposition to weapons sales has extended into the government, with key Conservative lawmakers thought to be debating privately for arms sales to be halted.

“This just shows how fast the Conservatives are moving away from public opinion,” said Tom Brake, a Liberal Democrat lawmaker. “Instead of giving the Saudis a stern talking to, ministers are flogging them arms.”

Last week, the UK High Court ruled that London’s weapons sales to Riyadh are not against the law.

The ruling came despite the judges conclusion that there was “a substantial body of evidence suggesting that the [Saudi-led] coalition committed serious breaches of international humanitarian law in the course of its engagement in the Yemen conflict”.

Saudi Arabia has been bombing Yemen since March 2015 in a bid to restore the fugitive president Hadi, a Riyadh ally, to power. Yemen’s crisis began after Hadi stepped down as president and refused to negotiate power-sharing with the country’s Houthi Ansarullah movement.