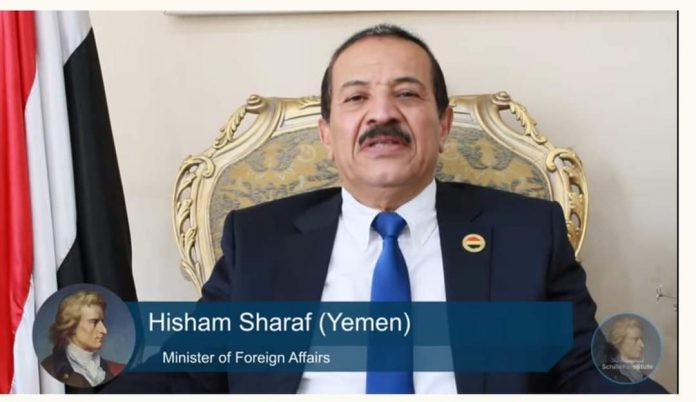 Yemen’s Minister of Foreign Affairs, Hisham Sharaf has delivered a speech at a conference organised by the Schiller Institute, a think tank based in Germany.

At the conference, he expressed his appreciation to Mrs. Helga Zepp-LaRouche, President of the Schiller Institute.

Sharaf stressed that his participation in the World Conference, comes in conjunction with the celebrations of our country’s National Day of Steadfastness on March 26.

Sharaf spoke of Ma’rib province, pointing out that it is “Yemeni territory and a Yemeni affair and not an encroachment on land outside our borders.”

Regarding the Covid-19 crisis, he said that Yemen tries to rely on itself due to the absence of any country standing with Yemen, despite the attempt of some who have only achieved the help or arrangements that are going through the United Nations.

He also spoke of a donor conference that is trying to mitigate what Saudi Arabia and its alliance have caused for political ends.

The Minister stressed that the Yemeni people are calling for peace and living among the international community, and they are waiting for the return of the reception of their friends from around the world.

Sharaf said that many talk about peac, and that America has assigned Mr. Tim Lenderking as its envoy to the country.

“Yemen welcomes those who want peace, but it must be a real, sustainable, just and unconditional peace by the countries of Saudi and Emirati aggression,” Sharaf said

The Minister confirmed that Yemen will continue to support the efforts of UN Envoy Martin Griffiths.

He stressed in the context of the reconstruction that “Yemen will rebuild its land, and those who killed our people and destroyed our country will pay the price.”

“Yemen will work its best within the umbrella of the Silk Road to become a successful and active element in the Silk Road Initiative,” he added.