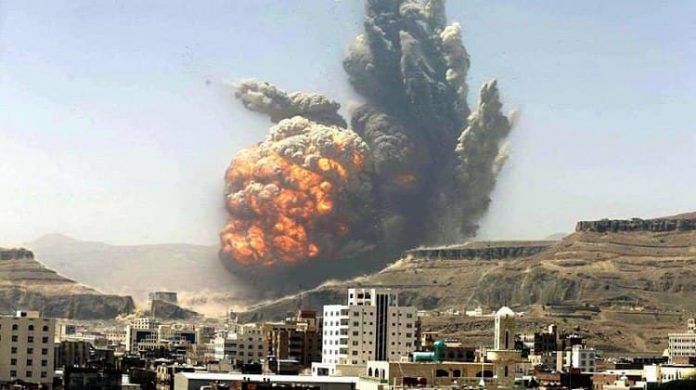 The spokesman for the Yemeni Armed Forces, Brigadier General Yahya Sare’e, had on Sunday announced that Yemen had been subjected to more than 266,510 airstrikes by Saudi-led aggression aircraft during the past six years of war on the country.

Brigadier General Yahya Sare’e held a press conference in Sanaa this afternoon, entitled “We are coming to the seventh year,” in which he revealed the statistics on six years of steadfastness in the face of the coalition.

The spokesman said that hundreds of airstrikes were not monitored, especially during the years 2015 and 2016, noting that the total aggression airstrikes in Yemen since the beginning of the current year 2021 amounted to 1,000 airstrikes already.

He explained that most of the air raids targeted villages, cities, homes, roads, mosques, and private and public facilities, and led to the death and injury of tens of thousands of Yemenis.

The competent authorities will reveal statistics related to crimes, victims, repercussions, and damages, he added.

Sare’e affirmed that the invading coalition, in which more than 17 countries participated, launched its sea, land, and air aggression against Yemen six years ago, indicating that the Yemeni Armed Forces were able to confront this aggression.