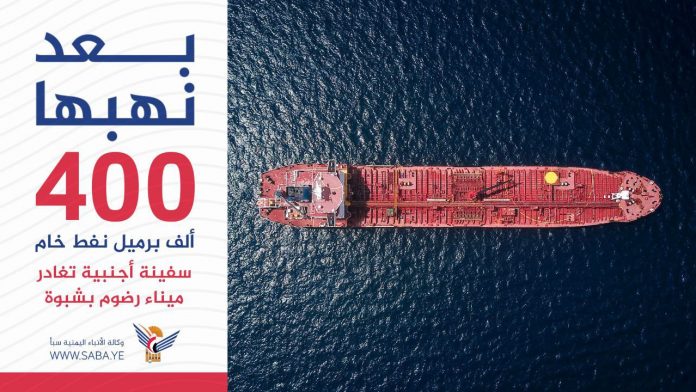 The official explained to Saba that this ship had arrived a few days ago at the port of Radhum, coming from the UAE.

He pointed out that the ship loaded more than 400,000 barrels of crude oil, with a value of more than 43 million and 640,000 dollars, according to oil prices on the international stock exchange, equivalent to 49 billion Y.R according to the exchange rates in the occupied areas.

The official pointed out that the looting of crude oil from Yemen comes in light of the continuation of the organized looting by the aggression and its mercenaries of the oil revenues and the country’s wealth, and their continuing to cut the salaries of state employees for more than six years.

He stressed that any actions taken through the government of traitors, whether by selling, waiving, transferring or transferring any of the shares and rights owned by any contractor member in any sector, are considered unacceptable.

The official called on the international community and all international organizations to play their role in stopping the tampering with the wealth of the Yemeni people by the government of traitors.

This comes about two weeks after a giant ship left the port of al-Shaher in Hadhramaut province on the 11th of this month, after it looted more than two million barrels of crude oil, with a total value of more than $270 million, according to oil prices on the international stock exchange, equivalent to 162 billion Y.R.