Home Articles ‘We are trapped in war’: one year on and still no end... 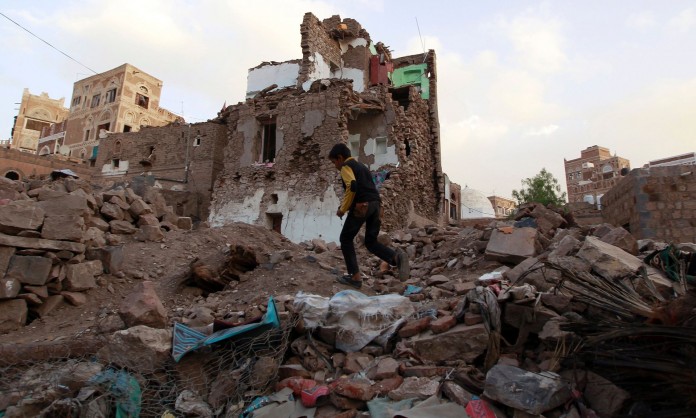 The basement has become the only refuge for the people of Sana’a.

A loud sound in the street, even the bang of a teacup on the table, is enough to send the children scurrying to that place they know all too well, after a year of airstrikes and destruction.

“You sit down for lunch and you put a cup on the table and it makes a sound and they flinch as if they expect it’s a bomb,” said Hisham al-Omeisy, a father of two children and political analyst based in the Yemeni capital.

“You now see a six-year-old saying, ‘When I grow up I want to be a pilot and bomb the Saudis because of what they’re doing to us’,” he added. “The social fabric has been ripped apart.”

One year of war has left Yemen – already the Arab world’s poorest country – torn apart, with faltering peace prospects and fading hope that the country could one day be put back together.

Saudi Arabia launched its aerial bombing campaign on 26 March 2015, since then, the most o the Yemeni cities reduced to rubble.

The Guardian, British newspaper, said that they attempted to travel to Sana’a for the anniversary of the conflict, but repeated attempts to secure permission from the Saudi-backed government were not granted. Flights into Sana’a are stopped and searched in Saudi Arabia.

A UN-brokered truce is expected to come into effect in April, ahead of peace talks in Kuwait. After an airstrike on a market in Sana’a earlier this month killed dozens, Riyadh significantly scaled back its campaign in the capital.

But unemployment and poverty are rife in Sana’a, electricity has been non-existent for much of the last 10 months, prices have risen exponentially, thousands of civilians have died, child soldiers are fighting in horrific numbers, and 80% of the population is in need of humanitarian aid. Meanwhile, none of the stated goals of the Saudi military campaign have been accomplished.

Meanwhile, the airstrikes continue. Omeisy moved his children from their school to one close to his house; many other families in the capital have pulled them out of school altogether rather than risk their death.

“They hit everything, hospitals, orphanages, schools,” he said. “You live in constant fear that your kids’ school could be the next target.”

Indeed, the last few months alone have seen hospitals belonging to the charity Médecins Sans Frontières being bombed with alarming regularity, particularly in the northern province of Sana’a – Sada’a-, prompting condemnation by the international community.

For now, the people of Sana’a get by with what they can. Those who can afford it have turned to solar panels, a burgeoning industry in a city without power, or generators.

Hospitals are mostly out of commission with few resources. One in three Yemeni children under five – 1.3 million – are now acutely malnourished, with nearly 10 million struggling to survive without clean water, according to the charity Save the Children.

“For millions of children here, the terror of airstrikes and shelling, and the destruction of everything around them has become a daily fact of life. This must not be allowed to continue,” said Edward Santiago, Save the Children’s country director in Yemen.