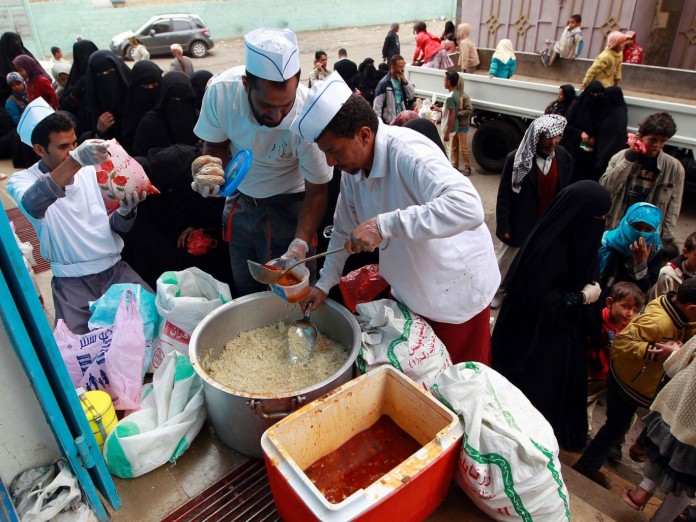 Oxfam  said that over 80 per cent of the population in war-torn Yemen is in need of humanitarian aid and many are facing starvation.

The charity also warned of the likelihood of a financial crisis in the country, which could further worsen the already dire situation.

Over 14 million Yemenis are hungry and 21.2 million – 82 per cent of the population – urgently need humanitarian assistance, according to Oxfam.

Importers to Yemen are finding it harder to get credit from international banks nervous about involving themselves with such a fragile market.

This could lead to further financial difficulties for the citizens of a country, which regularly ranks as the poorest in the Middle East.

On a grassroots level, many low income Yemenis have responded to rising prices by buying food on credit, causing debts they cannot repay.

Lenders are now reluctant to provide money to poor families to buy food.

It is feared these factors could result in new food price rises affecting a quarter of the population.

“All the evidence shows that the poorest people do not have the ability to withstand this crisis for much longer,” Oxfam said.

Sajjad Mohamed Sajid, Oxfam’s Country Director in Yemen, said: “A brutal conflict on top of an existing crisis, a catastrophe on top of catastrophe, has created one of the biggest humanitarian emergencies in the world today – yet most people are unaware of it.

“Men, women and children are caught between reckless bombing from the sky and indiscriminate shelling on the ground, with nowhere to hide,” Sajjad added.

According to Sajjad  close to 14.4 million people, more than half of all Yemenis, are hungry and the majority will not be able to withstand the rising prices for food if importers are unable to trade due to a crippled financial system.”

The embattled country is dependent on imports for 90 per cent of its food, though the dangerous situation limits what can get into the country.

In addition to Saudi airstrikes which have destroyed farms and markets, agricultural productivity has plummeted because of a fuel crisis related to the conflict.

Infrastructure such as supply routes, warehouses storing food aid and vehicles carrying humanitarian supplies have also been hit by bombs.

Last summer, 10 out of the 22 governorates in Yemen were classified as ‘one step away’ from famine and in need of immediate life-saving assistance.

Oxfam has criticized Western governments for not doing more to help resolve the conflict.

“Without peace, Yemen risks sliding in to famine but some world leaders seems more intent on fuelling the conflict than stopping it,” Mr Sajid said.

“In 2015 governments reported total arms sales of $25 billion, including drones, bombs, torpedoes, rockets and missiles, to belligerents in the conflict.

“Governments – particularly the US and UK, the main supporters of [Saudi led] coalition forces – must act as peace brokers, not arms brokers.”

The British government has faced renewed criticism for supplying arms to Saudi Arabia, which are believed have been used in Yemen.

In March, protestors linked to Amnesty International delivered replica missiles to Downing Street to call on the government to end the supply of weapons to the Saudi military.

British companies such as BAE Systems have sold 58 Euro fighter jets and 2,400 500lb Pathway-IV guided missiles to Saudi Arabia in the past year.